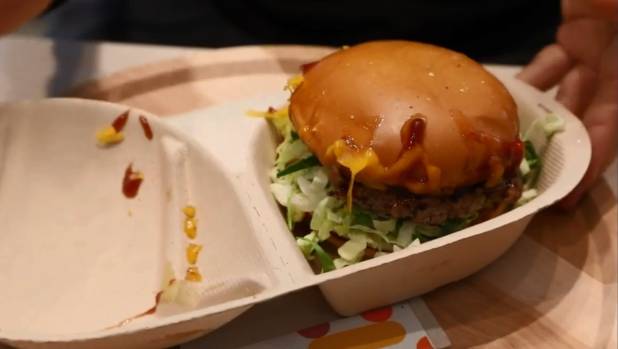 On June 27 (June 28 in NZ), the world’s first robot-crafted burger will roll off a conveyor belt in San Francisco, US, and into the hands of the public.

You could call it the freshest burger on Earth.

The product, from Bay Area-based Creator, a culinary robotics company, is assembled and cooked in a machine that contains 20 computers, 350 sensors, and 50 actuator mechanisms. It does everything from slicing and toasting the brioche bun to adding toppings (to order) and seasoning and cooking the patties, all in five minutes.

The meat is ground to order-why it’s touted as so fresh-and sourced from premium ingredients. It emerges from the machine piled with tomatoes and lettuce, sprinkled with seasonings, and drizzled with sauces, at which point it’s transferred by human hands to the customer. The price: US$6 – that’s NZ$8.73.

READ MORE:
* How automation will change the building industry
* Robots are coming for our jobs – we need to get creative
* Robots coming to NZ forests

Formerly known as Momentum Machines, Creator was founded by entrepreneur Alex Vardakostas in 2012. The 33-year-old has assembled an Avengers-like superteam of engineers, designers, and roboticists from Apple, Tesla, NASA, and Walt Disney Imagineering R&D. The team also includes alumni from elite restaurants such as Chez Panisse, Momofuku, and SingleThread.

​Vardakostas’s pitch is simple: Machines can cook burgers over a hot griddle and slice tomatoes more efficiently than a human can and don’t have the health hazard of showing up to work the grill with a cold.

And then there’s the social media gold mine that a Willy Wonka-esque food machine presents. The 14-foot-long contraption, which the team refers to as a “culinary instrument” rather than robot, features glass chutes that transport buns, silos that dispense sauces, and paddles that gently push the evolving burger along.

“June 27 is a big day,” says Vardakostas. “When I started this process eight years ago, there wasn’t the inevitability that this would happen with food. Now not only is it inevitable, but it also produces a much higher quality product.”

I went to the Creator storefront, in San Francisco’s South of Market neighborhood, to sample the four burgers that will be on offer when the place opens and decide whether Creator burgers deserve to be as ubiquitous as driverless cars.

The Creator space is spare and clean, with white-tiled walls, a poured concrete floor, and light ash wood accents. (Per Salvaag, a lead designer for BMW, consulted on the space.) It looks more like a salad bowl spot than a burger place, with only a discreet scent of griddled meat to set it apart.

Even the prep stations that ready accompaniments such as skin-cut fries and seasonal grain salad are hidden behind large glass-walled refrigerators showing off the principal ingredients. Instead of a counter, the glass-walled machine is front and center. Within are a series of oversize vertical tubes with stacks of tomatoes, onions, pickles, and so on.

Lanes of brioche buns are positioned overhead. “I consider this to be the most transparent restaurant,” says Vardakostas. The one part of the burger-making process that customers won’t see is the grinding and cooking of the burger. “There was a hesitation about seeing meat being ground,” he adds.

The machine in action is a made for fast-motion video.

First the brioche travels across the chute, pushed by a wooden block (and air pressure). It then shimmies down a chute as it’s sliced, toasted, and deposited in a leaf-shaped, custom-made container. Traveling along the copper-colored conveyor belt, it lands under the sauce spigots-there are around eight on offer, including barbecue, onion jam, shiitake mushroom, and ballpark mustard.

Next are the sweet pickles, tomatoes, and onions-sliced to order, they land in slow motion on the bun. Shredded lettuce follows, then cheese-mild or smoked Cheddar and grated to enhance the melting potential. At the end of the line are large tubes of seasoning, including alderwood smoked salt, sprinkled on the griddled 4-ounce burger before the patty lands on the cheesed half of the bun.

The only workers you’ll see around the machine, apart from the odd employee replacing ingredients, are “concierges” at the front of the contraption to take orders and payment and a few at the end to serve the burgers.

Creator will be open for lunch on Wednesdays and Thursdays, and a limited number of diners can order via an online ticket system through August (ticket sales for August will go live on July 10). In September, Creator will open to the public.

The amount of money being poured into the gourmet burger market is vast. The maker of Impossible Burger, the plant-based product that simulates meat, has raised US$396 million according to techcrunch.com.

Vardakostas won’t share numbers -a 2017, Business Insider story reported US$18 million in financing – but he does confirm Google Ventures, Khosla Ventures, and Root Ventures are investors.

David Bordow, whose official title is culinary lead and experience designer, has led the effort to build an exceptional burger, particularly for the relatively inexpensive price. To create it, he and the consulting team Pilot R&D highlight a technique from star chef Heston Blumenthal.

Every patty you’ve ever had has been assembled from haphazard strands of meat from a grinder, packed together. Creator grinds its meat vertically and keeps the strands aligned as the burger is sliced into patties. When you bite into it, you hit the seams. The resulting bite is tender and juicy (the ground-to-order factor helps too). It’s the same principle as cutting across the grain of steak rather than into it, which yields a much tougher mouthful.

Vardakostas comes from a burger background. His family owns the Southern California-based A’s Burgers, and two of his aunts have burger chains. “When you make 400 of the same burger every day, you can’t help but think, ‘How would I make this experience better?’”

Like Steve Jobs, Vardakostas created the first prototype in his parents garage around 2010. When he went up to Menlo Park, California, to fine-tune the machine in 2012, he met Steve Frehn, a mechanical engineer with experience at NASA and Tesla Inc. who came on board.

“Before 2015, people wanted to do something sexier like self-driving cars. It was more socially acceptable to say I was unemployed than to say that I was working on a burger robot,” recalls Vardakostas. “But now it’s an easy sell to get people to come on board with the idea of improving food for everyone.”