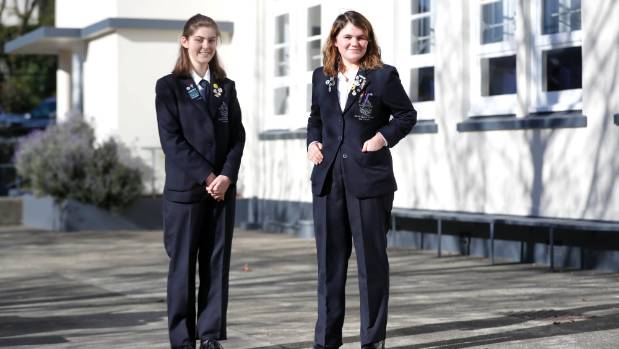 Nelson College for Girls has caught up with other secondary schools in the city, in allowing its students to wear pants to school.

But the college appears to be ahead of the times when it comes to all-girls schools.

Trousers became part of the Nelson College for Girls’ uniform several weeks ago, after a group of students sought the change.

“It’s 2018 and I think everyone should be allowed to wear, in some way, what they feel comfortable wearing. And skirts are definitely not a comfortable option for a lot of people.”

READ MORE:
* Girls wearing the pants in class, as schools cut skirts and dresses from their uniforms
* No trousers school uniform rule discriminates against our daughters

The school had been supportive throughout the process to add pants to the school uniform, Eynon said.

The group approached principal Cathy Ewing last year, who took the matter to the school board.

The board then suggested a survey of students, Ewing said.

“A significant enough [number] were interested in it being introduced into the uniform. Fewer were saying they would purchase them, but they felt the option should be there for those who wanted to.”

The school hadn’t been considering introducing pants into the uniform beforehand, she said.

“I think you would find there is a large number of girls schools that don’t have pants as an option. It hasn’t been something that we had been intending necessarily to do, but it came from a group of girls … and we listened to their views.”

The Ministry of Education didn’t have information about how many schools give girls the option of wearing trousers, with schools making their own decisions around uniforms, it said.

Pants are not part of the uniform at Wellington Girls’ College, Auckland Girls’ Grammar or Christchurch Girls’ High School.

But girls could apply to the school to wear pants, if there were circumstances in which they felt they need to wear them, Auckland Girls’ Grammar principal Ngaire Ashmore said.

Reasons could be related to culture, religion or comfort, with a number of girls wearing trousers at the school, she said.

Trousers have been part of the school uniform at Waimea College in Richmond for about 10 years. But only a handful chose to wear them, acting principal Graeme Smith said.

The college lets the girls wear pants for warmth, and to allow them a degree of choice, she said.