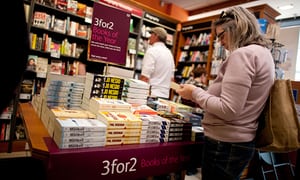 Stockbridge branch to open under Waterstones name rather than appearing independent

Waterstones has backtracked on plans to open one of its new unbranded stores in a district of Edinburgh that is already home to an independent bookshop – following an outcry that included criticism from figures including the Scottish novelist Val McDermid.

A shop will be opened in the Stockbridge area of the city but it will be clearly branded as Waterstones, according to the company’s managing director, James Daunt, who admitted: “We messed up.”

Golden Hare Books, which has been in Stockbridge for four years, had accused Waterstones on Monday of breaking a pledge not to site unbranded stores in areas that are already home to independents after plans emerged for the opening next spring.

“In our insular way we forgot about them. Literally, I forgot entirely that they existed, which is one of the perils of a big chain … the left hand sometimes doesn’t know what the right hand is doing,” Daunt told the Guardian.

“We will also need to work with them to ensure that we do not do anything predatory or anything that imperils them at all.”

The U-turn was hailed as a “small victory” by Julie Danskin, the manager of Golden Hare Books, who said it was clear that the community had not responded well to the news.

“We are very glad that James Daunt and Waterstones have done the decent thing. In future, though, one other thing that Waterstones can do is really dial down the discount offers on books because it does hit us in a way that does not need to happen.”

Daunt said that the rollout of the unbranded stores – which began in 2014 with the opening of Southwold Books – would continue, although there would always be a clear role for its larger branches. The idea was to put “good people” in charge and encourage them to foster unbranded branches with a view to them evolving into “idiosyncratic, quirky little shops of the best sort”.

“The key – and one of the things I have continued to struggle with at Waterstones – is how, within the context of a chain, you get the individual booksellers to create a distinctive shop,” said Daunt, a former banker turned career bookseller who was brought in to rescue the chain in 2011 after a buyout by the Russian billionaire Alexander Mamut.

“That is difficult and it’s about breaking a culture that has been trying for years to do something different.”

The company, which was sold in April to US hedge fund Elliott Advisors, made its first profit in years last year – an achievement linked to a strategy of trying to run branches like local bookshops.

Daunt, an opponent of Brexit, said that he also believed that Waterstones was very much “a force for good” in the current climate, adding: “These are times when we need bookshops, as things get spiky.”

Gesturing down at the shop floor of the company’s London flagship in Piccadilly, he added that while its way of operating was different from branches in largely Brexit-voting towns such as Barrow-in-Furness, it was still important to keep outlets in such places.

“We need to keep a shop there, and in Middlesbrough and Sunderland,” he added. “I am someone who finds Brexit an abomination and a betrayal of everything I stand for and I think that would be true of those who work in our shops. Booksellers have always been that way, but the importance of our shops is, ironically, often the case in places that perhaps in a wider sense appear to be more hostile environment. I think, though, that something much more complicated is going on in society at the moment.”