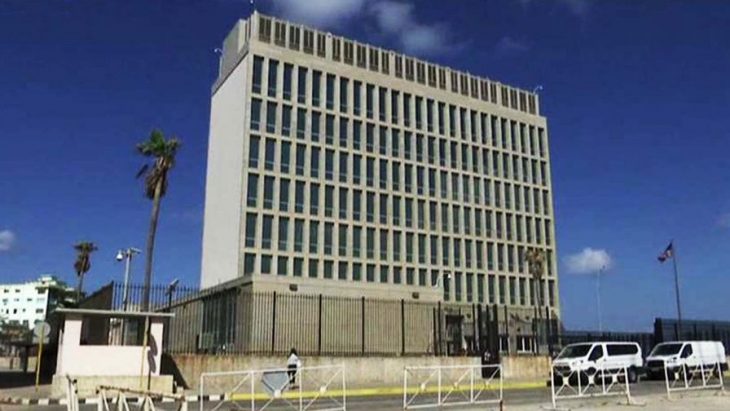 Scientists: Cuba sonic attacks may have been caused by malfunctioning bugging devices. Rich Edson reports from the State Department.

Scientists: Cuba sonic attacks may have been caused by malfunctioning bugging devices. Rich Edson reports from the State Department.

The State Department announced on Thursday that another U.S. diplomat has been hurt in the mysterious health incidents occurring in Cuba, bringing the total of Americans suffering from such ailments to 26.

Heather Nauert, the State Department spokesperson, said the diplomat was “medically confirmed” to have experienced health effects similar to those reported by other members of the U.S. Havana diplomatic community.

This and another case confirmed last week resulted from a single occurrence in late May in a diplomatic residence in which both officers were present, Nauert said. They were the first confirmed cases in Havana since August 2017.

SEATTLE COPS FLEE THE FORCE IN ‘MASS EXODUS’ DUE TO FRUSTRATIONS WITH CITY’S POLITICS, REPORT SAYS

She confirmed that U.S. government agencies would continue “to work diligently to determine the cause of the symptoms, as well as develop mitigation measures.” The patients have been suffering from a range of symptoms and diagnoses including mild traumatic brain injury, also known as concussions. Researchers at the University of Pennsylvania said the diplomats

Nauert said the State Department was informed of the incident on May 29 and the U.S. would continue to investigate it.

The United States has said that the Cuba incidents started in late 2016 but has not said what caused them or who was behind them.

Cuba has denied any involvement or knowledge of the incidents. Initial speculation centered on some type of sonic attack owing to strange sounds heard by those affected, but an interim FBI report in January found no evidence that sound waves could have caused the damage, The Associated Press has reported.

NEW JERSEY SCHOOOL BUS FLIPS ITS SIDE IN HIGHWAY CRASH

“Whoever uses the term ‘attack’ to refer to symptoms reported by U.S. diplomats is consciously lying, with a well-defined political agenda,” Cuba’s director-general of relations with the U.S., Carlos de Cossio, wrote on Twitter. “The United States has a long history of resorting to political manipulation and aggression by overt and covert methods to achieve its political and economic goals.”

An American government worker at a U.S. consulate in China, who was also confirmed to have been sickened earlier this year, raised concerns that the mysterious health incidents that occurred in Cuba have spread.