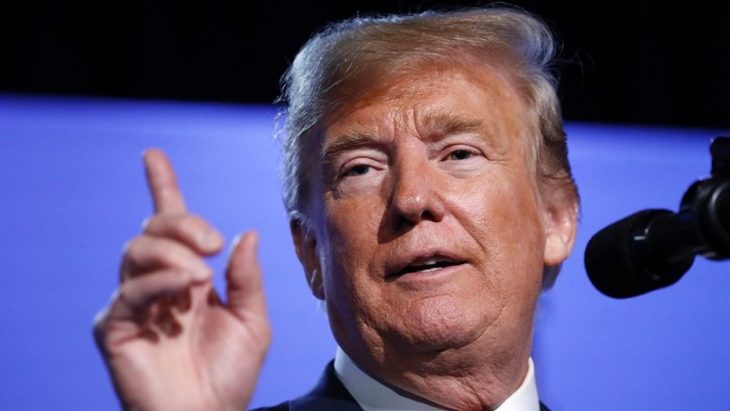 President Trump pronounced the NATO summit a success and himself a “stable genius” in a freewheeling press conference that followed a sometimes tense meeting of the western alliance.

Trump spoke to international reporters in Brussels around noon local time Thursday, following an emergency session in which NATO members addressed his criticism that they are not spending enough on defense.

“Yesterday, I let them know that I was extremely unhappy with what was happening and they have substantially upped their commitment.”

After the session, Trump touted concessions from allies to boost defense spending and downplayed what had been, at times, uncomfortable negotiations conducted before the public.

“Yesterday, I let them know that I was extremely unhappy with what was happening and they have substantially upped their commitment,” he said.

President says allied countries have agreed to up their financial commitment during a press conference in Brussels.

Trump pressed members of the 69-year-old alliance to meet their commitment of spending 2 percent of their gross domestic products on defense by 2024. He said Thursday that the pressure he put on the nations has resulted in a possible increase of $40 billion in defense spending.

“The United States was not being treated fairly, but now we are,” Trump said. “I believe in NATO.”

However, shortly afterward French President Emmanuel Macron denied Trump’s suggestion that NATO allies have agreed to boost defense spending beyond 2 percent of GDP. He said the agreement put out Wednesday “confirms the goal of 2 percent by 2024. That’s all.”

Macron also denied reports that Trump threatened to withdraw the United States from the NATO military alliance amid the funding dispute.

One reporter, during the press conference, asked if Trump’s message would change once he departed on Air Force One, perhaps referring to tweets that followed G7 talks, in which Trump turned on Canadian Prime Minister Justin Trudeau and Macron.

“That’s other people that do that,” Trump replied. “I don’t. I’m very consistent. I’m a very stable genius.”

Trump, who is scheduled to meet with Russian President Vladimir Putin in Helsinki Monday, blasted Germany earlier this week for its billion-dollar natural gas deal with Moscow. But on Thursday, he said he was ready to sit down with Putin.

“He’s a competitor,” Trump said. “Somebody was saying is he an enemy? He’s not my enemy. Is he your friend? No, I don’t know him very much. But the couple of times I’ve met him, we’ve gotten along well…. Hopefully, someday, maybe he’ll be a friend. It could happen.”