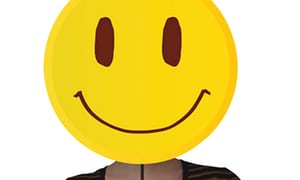 The science of happiness is complex, but alongside psychologists and neurologists, larks from the likes of Spike Milligan and Terry Pratchett have useful things to impart

Everyone knows it. Everyone wants it. But what is happiness, really? What’s going on in our brains when we experience the much-sought-after emotion? That’s what I wanted to find out when writing my new book, The Happy Brain. What did I find out? Essentially, that it’s very complicated, as is typically the case when looking at anything produced by the brain. One of the only firm conclusions I arrived at is that anyone offering a simple “secret” or “key” or “five easy tips” for happiness that work for everyone is either hopelessly naive or actively misleading.

In truth there are so many things that influence our happiness; our environment, our age, our relationships and community, our jobs and ambitions, our health, our wealth, our past, our future and so on. All these things can – and often do – play a part in our overall happiness. The following books provide excellent examples of the importance, complexity and unpredictability of happiness, and the numerous ways it can be achieved.

1. Adolf Hitler: My Part in his Downfall by Spike Milligan
When we think about what makes us happy, it often involves modern-day luxuries, such as expensive possessions, travelling, entertainments etc. But it’s possible to be happy without these things, even in the direst circumstances, as Spike’s collected war diaries demonstrate. Even amid a war zone, it seems the human brain can still find joy, laughter and pleasure.

Of course, this isn’t a given, and bleak situations will grind you down eventually. Milligan’s diaries grow more sombre and tragic as they progress. But even so, there are persistent happy moments throughout, which provide an amazing example of just how durable and persistent happiness can be.

2. Cringeworthy by Melissa Dahl
Humans are an incredibly social species, so our brains are often affected by, or geared towards, interpersonal interaction. Consequently, much of what we feel and experience is heavily influenced by other people. This has consequences for our happiness and how we go about achieving it.

In her first book, New York magazine’s Melissa Dahl focuses largely on the nature of embarrassment, in exquisite but accessible detail, providing a brilliantly insightful look at what the perceptions of others do to us on a fundamental level. Having it on your shelves would be nothing to be embarrassed about.

3. Girl on the Net: How a Bad Girl Fell in Love
People talk of falling in love, marriage and living “happily ever after”, but nothing’s ever that simple. Human love, sex and relationships are complicated; we expect them to fix everything, but both our underlying biology and general societal attitudes often make them baffling and stressful, which leads to unhappiness.

The acclaimed sex writer Girl on the Net does stellar work in highlighting the benefits and pitfalls of balancing a long-term monogamous relationship with an overactive libido, and the various ways to find happiness while doing so.

5. How to Survive the End of the World (When It’s All in Your Head) by Aaron Gilles
Most references to the workings of happiness focus on the reward pathways, or neurotransmitters such as endorphins or serotonin. But it’s more than that; a lot depends on quieting the brain’s threat detection mechanism, so we don’t experience as much fear and stress.

Unfortunately, the mechanism can become ridiculously active, leading to depression and chronic anxiety. Finding happiness in such a scenario is harder, but it can be done, as this new book by Gilles (aka Twitter maestro @Technicallyron) demonstrates with aplomb. A fast-paced, amusing and insightful read, particularly for anyone dealing with similar problems.

6. Inventing Ourselves: The Secret Life of the Teenage Brain by Sarah-Jayne Blakemore
As already mentioned, our brains change over time. Sometimes these changes can be drastic, and governed by our internal biology. The most obvious example of this is adolescence, when our brains suddenly go into huge upheaval, and our behaviours, desires and moods, all of which feed into our happiness, become very different. I tried to cover this briefly in my own book, but this is a thorough, informative read across the whole subject.

7. It’s All in Your Head by Suzanne O’Sullivan
Happiness is often regarded as an optional extra in life, something you can have if you work hard or are lucky enough. But a lack of happiness or abundance of stress can be genuinely damaging for your physical health. The moods and emotions we feel have complex consequences for our underlying biology, and appreciating that is an important step in understanding happiness.

This link between mind and body is superbly demonstrated in O’Sullivan’s award-winning book, where the experienced neurologist describes in detail her patients with the most remarkable psychosomatic disorders.

8. Mr Shaha’s Recipes for Wonder by Alom Shaha
Many things stimulate the brain in just the right way to increase the odds of being happy: positive interactions with our parents or children, reducing uncertainty through obtaining information, new experiences, creating things. All provoke a subtle but positive response in the typical human brain.

As a parent of young children, I found all these things covered by Shaha’s science-based discovery book, which is filled with beautifully illustrated experiments that adults can lead youngsters through.

9. Night Watch by Terry Pratchett
Pratchett’s Discworld books have made millions of people happy, and in Night Watch Sam Vimes, commander of the Ankh-Morpork Watch, inadvertently returns to the “old days” when he was but a lowly street copper.

In Pratchett’s inimitable style, this beautifully exemplifies an important aspect of happiness: nostalgia. Long thought to be a cognitive defect, it’s now considered beneficial, providing motivation and enhancing wellbeing and happiness. But this happiness often depends on filtering out the (many) unpleasant aspects of the past. Whether or not you can reconcile the then with the now will determine how happy you are.

10. 100 Best Video Games (That Never Existed) by Nate Crowley
I like video games. I enjoy humour. I’m fascinated by technological progress. However, I never expected a book that combined them. And yet, here it is. There’s no real reason for 100BVG(TNE) to exist. And yet it does, because sometimes being happy involves doing something just for the joy of it. And it’s important to not lose sight of that amid all the analysis and introspection.