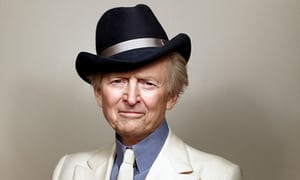 Journalist and author who won a name as a brilliant satirist with the ‘novel of the 1980s’, The Bonfire of the Vanities

The writer Tom Wolfe, who has died aged 88, was a great dandy, both in his elaborate dress and his neon-lit prose. Although he was in his late 50s when he became a bestselling novelist, with The Bonfire of the Vanities (1987), some 30 years before that he was already famous as a journalist, was indeed that extremely rare thing, the journalist as international celebrity.

It was a part Wolfe played up to, wearing showy tailor-made white suits, summer and winter, as well as fancy headgear and shirts with detachable collars. The overall impression was of a fashionplate from a bygone age. The sartorial fireworks fitted in very well with the highly eccentric literary style Wolfe used and which made such a name for him when he published The Kandy-Kolored Tangerine-Flake Streamline Baby (1965), which brought the world the first news of the 1960s counterculture in California.

The curious style came about by chance. In 1963, commissioned to write about custom cars for Esquire magazine, Wolfe got as far as writing hurried notes and told his editor, Byron Dobell, to give them to someone else because he could not produce the finished piece. Dobell read the notes and printed them as they were.

The peculiar style, full of exclamation marks, words elongated for special effect, and words in capital letters, gave the impression of news that was too hot for the simple declarative sentence; also that it was highly complicated to explain but that Wolfe himself knew all there was to know about it, and from the inside. As the news was from the counterculture or, later on, from the world of the New York new rich, the prose seemed to fit the passion.

The Bonfire of the Vanities, the tale of the fall of a young Wall Street trader, one of the self-styled “masters of the universe”, was called the “novel of the 1980s” and won Wolfe a name as a brilliant satirist. The one dark cloud in its success was that the 1990 film of the book, directed by Brian De Palma, failed both critically and at the box office, in spite of Tom Hanks playing the lead. The other Wolfe book turned into a movie fared much better. This was The Right Stuff (1979), a non-fiction account of the first astronauts. The 1983 film was made by Philip Kaufman and won four Oscars.

Fans had to wait 11 years for the next novel, A Man in Full (1998), a rather disjointed and over-long look at the new south of the 90s. This was attacked by John Updike, Norman Mailer and John Irving. Updike said it was not literature but entertainment; Mailer described it as like being made love to by a 300lb woman (“Fall in love or be asphyxiated”) and Irving said simply: “He can’t fucking write.” Wolfe had a good time counter-attacking. He called them “my three stooges”. He could afford to be offhand with his critics, for A Man in Full had received an advance of $7.5m.

The wonderful early pieces received nothing but praise. The Electric Kool-Aid Acid Test (1968) was called an American classic, “a DayGlo book”, the Washington Post said. It was the story of a cross-country trip in a bus by Ken Kesey, author of One Flew Over the Cuckoo’s Nest, and his spaced-out young followers, the Merry Pranksters, all high on LSD and passing it out free in glasses of Kool-Aid.

Radical Chic and Mau-Mauing the Flak Catchers (1970) comprised more first-rate pieces of comic sociology, particularly the title story about wealthy New York liberals making fools of themselves throwing parties for the Black Panthers. The Pump House Gang (1968) and The Mid-Atlantic Man (1969) were collections of articles; The New Journalism (1973) an anthology; The Painted Word (1975) art criticism; From Bauhaus to Our House (1981) architecture criticism; Ambush at Fort Bragg (1997) a novella, a Rolling Stone magazine serialisation then in an audio-only version.

At the age of 73 and after suffering a heart attack and a quintuple bypass, Wolfe surprised everyone with I Am Charlotte Simmons (2004), a brilliantly funny and hard-hitting demolition job on American higher education set in a fictional Ivy League university in Pennsylvania. Back to Blood (2012), set in Miami and with a Cuban-American cop as its lead character, was described by the Guardian’s reviewer as “like a novel for the hard of hearing, megaphone meets ear trumpet”; The Kingdom of Speech (2016) challenged theories of evolution and speech development.

Wolfe was born in Richmond, Virginia. In later years he described his father, Thomas, as an agronomist, but in the early years he had called him “a gentleman farmer”. Wolfe was encouraged to write by his mother, Louise, and at nine, he tried his hand at biographies of Napoleon and Mozart.

He went to a private day school, St Christopher’s, in Richmond, and then to Washington and Lee University, in Lexington, Virginia, where he played baseball and edited the literary magazine Shenandoah. He told me that he was very serious about being a baseball pitcher and once put on a tremendous amount of weight in order to throw the ball harder. This was a failure, because the weight slowed him up in the field.

After Washington and Lee, he went to Yale and got a PhD in 1957 in American studies. He then found a job in journalism on the Springfield Union in Massachusetts. That is where I first met him. It would be pleasant to think that his colleagues all saw what a success he would be, but this is not true. We only saw that he was different. This we put down to his being a southerner, and at that time in New England we were suspicious of southerners, thinking they might have a slave or two stashed away in a backyard shed. His southern ways were in fact sometimes shocking: he told jokes about black people without taking in the pained expressions of his audience – or perhaps he was doing it on purpose to annoy us.

Early on, he demonstrated his unusual angle on stories, and it was not always appreciated. Once he was sent to cover an outdoor concert of classical music in the Berkshire mountains and wrote a long piece about the way people sat on the grass listening to it. This confused his editor at the Springfield Union newspaper. Another time he was covering an event at Mount Holyoke College in nearby South Hadley and wrote mainly about how the president of the college held his chin in a jut-jawed fashion while speaking. The college was furious and demanded an apology.

At this period he was spending most of his free weekends in New York, taking drawing lessons from a New Yorker artist. This interest in cartooning remained all his life; he published many of them and held one-man shows. Wolfe left the Springfield Union for the Washington Post in 1959; he then joined the old New York Herald Tribune in 1962 and there his real career began.

He was surprisingly shy, and when The Kandy-Kolored Tangerine-Flake Streamline Baby was published in the UK in 1966, he insisted that I make the trip down from Liverpool to be with him in London. He put me up in Brown’s Hotel in Mayfair. Nervous about the launch party being given by his publishers, Jonathan Cape, we went out drinking all day long and for some reason he started imitating WC Fields and could not stop it. It was amusing to read, in the newspapers reporting the launch, about his extraordinary accent.

Although the book was picked for the American Book of the Month Club and earned him $600,000, he was still very much a working journalist. The Herald Tribune called him from New York and said he must send them a story. He told me next day how lucky he was to have seen a man hit by a taxi in London. The man was sitting in the street nursing a broken leg and saying over and over again: “What a bore.” This, Wolfe thought, would show New York what a strange use of language the English had.

Wolfe came to stay with me in Liverpool and while there wrote much of what became The Mid-Atlantic Man. Every morning he went out in a suit and tie with a packet of ginger nut biscuits to sit in the Sefton Park palm house writing. He wrote everything in longhand first, using a fancy style of calligraphy so that sometimes he was getting only 14 words to a page. Afterwards he would rewrite on a typewriter, and never really took to computers.

Wolfe was mistaken for a liberal when he first started out, but his ultra-conservatism later became obvious. He not only supported Ronald Reagan, calling him “one of the greatest presidents ever” and, much worse to the east coast liberal mind, he praised George W Bush. When people said they would leave the country if Bush was elected, Wolfe said he might go to Kennedy airport to wave them goodbye. He thought Donald Trump “a lovable megalomaniac”, and, comparing him to Reagan, concluded that “brilliance is really not a requirement for politicians”.

In 1978 he married Sheila Berger, the art director at Harper’s magazine. She survives him, along with their two children, Alexandra and Tommy.