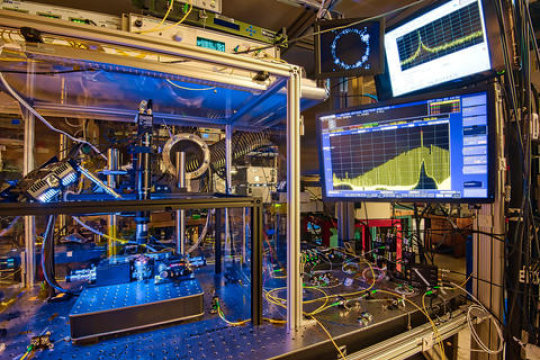 In an advance that could shrink many measurement technologies, scientists have demonstrated the first miniaturized devices that can generate desired frequencies, or colors, of light precisely enough to be traced to an international measurement standard.

In an advance that could shrink many measurement technologies, scientists at the National Institute of Standards and Technology (NIST) and partners have demonstrated the first miniaturized devices that can generate desired frequencies, or colors, of light precisely enough to be traced to an international measurement standard.

The researchers combined a pair of frequency combs, a tunable mini-laser and electronics to create an optical frequency synthesizer. The advance transfers the capability to program optical frequencies from tabletop-scale instruments to three silicon chips, while retaining high accuracy and precision.

Just as radio and microwave chips powered the electronics revolution, the miniaturization of optical frequency synthesizers to make them portable and suited to high-volume fabrication should boost fields such as timekeeping, communications, trace gas monitoring and astronomy.

The prototype synthesizer is described in the journal Nature, in a paper posted online April 25. Frequency combs are a Nobel-honored technology developed at NIST that are crucial to the latest experimental atomic clocks.

“Nobody knew how to make an optical frequency synthesizer using little chips,” NIST coauthor Scott Papp said. “This is the first breakthrough to show you can do this. Until now, no one’s ever used a chip-scale frequency comb to do metrology that’s fully traceable to an international standard.”

Each of the three chips is about 5 millimeters by 10 millimeters. With further advances in materials and fabrication, the chips will likely be packaged together by one of NIST’s partner institutions, Papp said.

In a full-size tabletop frequency comb — typically assembled by hand from metal and glass components — laser light circulates inside an optical cavity, a specialized set of mirrors, to produce a set of equally spaced lines that looks like a hair comb in which each “tooth” is an individual color. In the chip-based versions, the cavities are flat, round racetracks that are fabricated on silicon using automated techniques similar to those used in making computer chips.

The new optical synthesizer uses only 250 milliwatts (thousandths of a watt) of on-chip optical power — much less than a classic, full-size frequency comb.

The synthesizer output is the programmable laser, whose lightwave oscillations serve as optical clock ticks traceable to the SI second, the international standard of time based on the microwave vibrations of the cesium atom. The output laser is guided by the two frequency combs, which provide synchronized links between microwave and optical frequencies.

Each comb is created from light emitted by a separate, single-color “pump” laser. The NIST comb is 40 micrometers (millionths of a meter) in diameter. This comb has wide spacing between the teeth but can calibrate itself by spanning an octave — which, as in music, refers to the interval between two notes that are half or twice the frequency of each other. This feature calibrates the synthesizer.

The racetrack is a custom waveguide made of silicon nitride, which offers special properties that broaden the spectrum of light, concentrate the light in a small area to boost intensity, can be tuned through changes in geometry, and can be made like computer chips by lithographic techniques.

The Caltech comb is physically larger, about 100 times wider and made of fused silica. But this comb’s teeth are much finer and span a much narrower wavelength range — in the 1550-nanometer band used for telecommunications, the focus of the synthesizer demonstration. The spacing between the teeth is a microwave frequency that can be measured and controlled relative to the SI second. Through a digital mathematical conversion process, this fine-toothed comb identifies stable, accurate optical frequencies within the wider spacing of the calibrated NIST comb.

Thus, the two combs function as a frequency multiplier to convert the clock ticks from the microwave to the optical domain while maintaining accuracy and stability.

The research team demonstrated the system by synthesizing a range of optical frequencies in the telecom band and characterizing the performance with a separate frequency comb derived from the same clock. Researchers demonstrated the system architecture, verified the accuracy of the frequency synthesis, and confirmed that the synthesizer offered stable synchronization between the clock and the comb output.

Materials provided by National Institute of Standards and Technology (NIST). Note: Content may be edited for style and length.