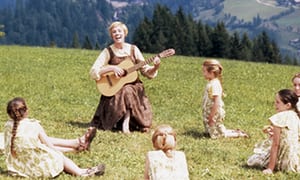 The Sound of Music is now rereleased in cinemas and now almost everyone – certainly me – has surrendered to the radioactive dairy cream of its power. Unlike with Abba, though, that conquest is not entirely complete. There is one person who still reportedly holds out against The Sound of Music and that is the 88-year-old Christopher Plummer, the actor who played Baron Von Trapp, and who has called the film “awful and sentimental and gooey”. I agree with the third adjective and a little with the second. The title is so familiar it’s possible to overlook its existentially pedantic weirdness.

The comic Katherine Ryan recalled that she once had a much younger boyfriend who asked if it was true that the movie Titanic was based on a true story. The same incredulity almost applies to The Sound of Music, based on the true story of the Von Trapp Family Singers, who toured a good deal in the late 1930s and finally left Austria for America quite openly.

The movie version was adapted from the Rodgers and Hammerstein stage musical, itself inspired by the 1956 German film Die Trapp Familie, whose screenwriter George Hurdalek created this essential romance, and is credited here. His story has a kind of transcendent, mythic status, over and above anything that might have happened in actuality. And it often does seem to challenge expectations. (Wait. Austrian Catholic nuns who were … anti-Nazi?)

Julie Andrews is Maria, first seen singing and spinning, arms spread wide, on the Untersberg near Salzburg. She is the headstrong novitiate whose childlike impulsiveness is looked on with kindly indulgence by the wise old Mother Abbess (Peggy Wood). The Abbess is to lead the classic number How Do You Solve a Problem Like Maria? The answer to that question is tacitly provided by the fact that it is reprised as Maria walks up the aisle on her wedding day. The implication is indelicate.

The Mother tells Maria that she is to take a job (salary not discussed) with a grumpy and yet swoon-worthily handsome widower, decorated naval officer Captain Von Trapp, who has seven children and orders them about with his bosun’s whistle. In this role, Plummer wears a chi-chi tailored suit that doesn’t look very 1930s: it’s the sort of outfit Brian Epstein would have bought for one of his clients from a shop in Carnaby Street.

Maria teaches the children to sing and of course falls in love with their father. Bad news for the elegant and worldly Baroness (Eleanor Parker) with whom the Captain had an understanding, but good news for their amusing friend, the dapper, cynical bohemian Max Detweiler (Richard Haydn), a music promoter who wishes to sign up the whole family as an adorable singing act.

The film has its own Judenfrage: is Max supposed to be Jewish? Or gay? (Effectively a distant cousin to Joel Grey’s MC in Cabaret?) If he is, this means that one of the film’s most heroic lines looks naive and patronising: when Von Trapp rebukes Detweiler for his shrugging unconcern in the face of Austria’s imminent Anschluss by the Nazi Germans. “You know I have no political convictions. Can I help it if other people do?”; “Oh yes, you can help it. You must help it.” There is also “Professor Kohner”, the off-camera toyshop owner who at Max’s request sells the family the puppet theatre that they use for their sensational number The Lonely Goatherd. But the film is never clear on his point.

Well, who can doubt its heart is in the right place, or doubt the sledgehammer punch and power of its musical numbers? Perhaps especially Edelweiss, a tune that really does sound as if it is an authentic folksong.

The way in which child actors are directed has evolved a fair bit since 1965, but even the children’s quaint performances have their charm, and there is incidentally real tension in Von Trapp’s final confrontation with the creepy telegram boy Rolfe (Daniel Truhitte). The location work in Salzburg has an ineffable charm and it’s all performed with such zinging, joyous energy.