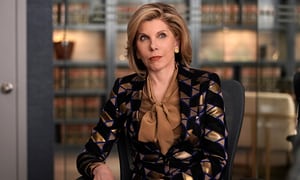 The Good Fight has been so relentlessly delightful to watch lately that it can be hard to reconcile the seriousness of its subject matter – the turmoil of the Trump era and the rise of violent populism – with the uproarious filter through which it’s being examined. The most unlikely thread running through it has been my hero Diane Lockhart’s increasingly untethered reaction to a political world turned upside down, which began with a bartender offering her a microdose of psilocybin mushrooms at a funeral, and continued through an occasional glimpse of hallucinatory news stories, that may or may not be real, which certainly speaks to the unnerving unpredictability of unstable times.

Time and again, Diane has been one of the most satisfying characters on television. She is capable, wry, and rarely loses her grip on anything, though this political climate has been testing. The Lockhart laugh, clipped and steady, often employed to devastating effect in The Good Wife, has appeared with more frequency in The Good Fight, which has seen her slowly evolving evaluation of and response to the Trump presidency. The absurdity seemed to paralyse Diane for a while; the unreality brought her to a point of near-apathy that has surely tempted many over the last 18 months. But at last, as the second season moves into its home stretch, she has flushed away the psychedelics, and is focusing on the attack with renewed vigour. Last week, when challenged by a young woman in charge of a #MeToo-ish website called Assholes to Avoid, who accuses Diane of betraying young women’s feminism for assisting in the site’s takedown, she finally snaps back. “Women aren’t just one thing,” she insists, “and you don’t get to determine what they are.”

Leaving aside the intelligent portrayal of the case itself, which had the whole office arguing to the point of fury about the lines between a bad date and sexual assault, if ever there was a manifesto of Diane Lockhart, then surely it’s that. In the series finale of The Good Wife, when she slapped Alicia Florrick, having been betrayed by both a friend and a work rival – get you a woman who can do both – she offered a glimpse of her emotional side. For a long time, Diane was a professional in the plainest sense of the word. We knew little about her other than through her career and ambitions. She didn’t have a family; any wrangling over work-life balance was left to Alicia. She was brilliant, and allowed to be so, without apology or regret. She was The Good Wife’s moral backbone but she was also its light relief. She could clink a whisky tumbler as well as she could demolish a district attorney.

In a show stuffed with obscenely strong performances, the incredible Christine Baranski, tough as iron yet somehow malleable enough to be surreal and silly, seemed to be having the most fun. And that is to say nothing of that wardrobe, and her impossibly immaculate hair. (To see her with wet hair recently, slicked back after her impromptu martial arts training – a bizarre and welcome replacement for the mushrooms – was a rare vision.)

In 2015, Baranski explained why Diane is such an appealing character. “I love her intelligence, I love that she’s in command of the facts. I think it’s great to see a woman who’s not just an emotional self or, at times, not an emotional being at all – she’s an intellectual being.” I admire Diane for that as much as I admire The Good Fight for now beginning to push her beyond it. While her icy command of any situation has long been a cooling balm, that slap allowed us in a little more. Her on-off relationship with Kurt has been a mature portrait of a marriage in which neither person is desperate for the other but would like to work out an honest way of being in each other’s lives. For all of Colin and Lucca’s goofy to-ing and fro-ing, or Maia’s impulsive infidelity, the romantic heart of the show, never overdone, is Diane figuring it all out. She is in the middle of a pleasingly grownup dilemma, and it is unusual, more’s the pity, to see a picture of a woman not in her 20s (Baranski is 66, but Diane is ageless) making a mess of love. But only, of course, if she can find the time.

By the end of The Good Wife, Alicia Florrick had become an admirably complex character, though not necessarily someone you would always choose to spend an hour with each week. The slap had been a long time coming – and with it, Diane ended a friendship, and took over Chicago.