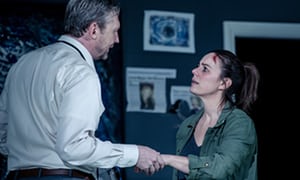 West Yorkshire Playhouse, Leeds
Joe Murphy directs an adaptation of the 2015 thriller with Jill Halfpenny playing an amateur sleuth drawn to the case of a missing woman

Surveying an elliptical painting, a character in this dramatisation of Paula Hawkins’s 2015 bestseller says: “The eye is always drawn to what’s absent.” Much the same is true of adaptations of admired books. Here you feel that an eerily compelling novel, with its multiple narration and Hitchcockian voyeurism, has been turned into a workmanlike thriller and you focus more on what is missing than on any minor gains.

Rachel Wagstaff and Duncan Abel, who have done this version, may have jettisoned Hawkins’s triple narrators and ingenious time-scheme but they remain true to the basic events. The main character, Rachel, is alcoholic, unemployed, divorced and obsessively interested in what she sees through train windows. She finds herself inexorably drawn to the case of a missing woman, Megan, about whom Rachel has fantasised and whom she has glimpsed kissing a man palpably not her husband. Given that Rachel was seen in the neighbourhood on the night of Megan’s disappearance, might she have vital clues to the case?

When the book came out, Rachel was wrongly dubbed “an unreliable narrator”: in fact, she was the victim of drink-befuddled memory rather than calculatedly misleading. Wagstaff and Abel, however, seem determined to clean up her act. Here she is less an alcoholic than a mild tippler and, far from being neurotically concerned by her haphazard recollections, turns into an amateur sleuth always one step ahead of the investigating cop, Gaskill. You can see what the writers are trying to do, which is to get away from the idea of the hapless, helpless, psychologically wrecked heroine, but while I admire their social purpose, it doesn’t enhance the story. It’s one thing to give female protagonists agency, but it doesn’t need to be detective agency.

It’s also not just the mysterious Megan who goes missing: so do vital characters from the book. Presumably for reasons of economy, the writers have dropped the figure of Cathy in whose flat Rachel lived and who was deeply censorious about her house guest’s booze-guzzling. Without Cathy, however, there seems no logical reason why Rachel should keep up the pretence of commuting to work every day and even her drinking loses its guilty furtiveness. I not only wanted Cathy to come home but I also yearned to see more of Rachel’s ex-husband and his new wife, who are an essential part of the heroine’s muddled memories.

Joe Murphy does a decent job of staging the action and Lily Arnold’s design suggests we are glimpsing events through an enlarged carriage window. The use of dazzling lights and express-train sounds to evoke Rachel’s memories is, however, misleading: the whole point of the story is what she sees when a train is at rest rather than in hectic motion. On the plus side, Jill Halfpenny captures well Rachel’s dogged determination to get to the root of the truth, Colin Tierney is sympathetic as the cop who never seems sure whether he should believe Rachel or book her and Florence Hall lends Megan the right touch of raffish glamour. Everyone works with a will but I sense that, having been turned into a so-so Americanised movie and now a humdrum stage version, Hawkins’s book resists adaptation and should be left in the hands of enthralled readers.