TENS OF THOUSANDS of protesters demonstrated in London against US President Donald Trump, whose on a four-day visit to Britain.

Earlier today, Trump held a joint press conference with British Prime Minister Theresa May, hours after the Sun published a story which quoted him as saying that she had “wrecked” Brexit.

Trump said that those remarks, an audio recording of which was published by the Sun, were inaccurate. He added that at a gala dinner at Blenheim Palace the night before he and May spoke for almost 90 minutes and had “probably never developed a better relationship”.

PM @Theresa_May and @POTUS Donald Trump visited UK and US military personnel at the Royal Military Academy Sandhurst, and then had a meeting at Chequers to discuss a range of foreign policy issues pic.twitter.com/HHY9l8r7Fw

Trump also had tea with Queen Elizabeth II at Windsor Castle, but will not attend any high-profile events in London where the big demonstrations are planned.

The Met Police released this image of Trafalgar Square, indicating the scale of the protests:

Current aerial view of Trafalgar Square. There remains space to the south side pic.twitter.com/VCzfPZXzGY

“#DumpTrump”, “This is the carnival of resistance” and “My mum doesn’t like you! And she likes everyone” read some of the signs held up by protesters as they marched down Oxford Street towards Trafalgar Square.

“No Trump, no KKK, no fascist USA!” the protesters chanted. 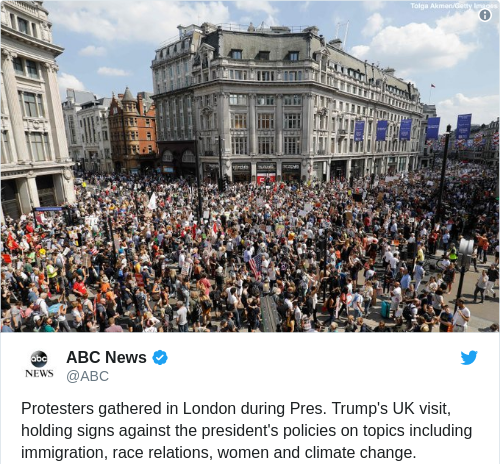 Some protesters banged on pots and pans, others blew on trumpets and many held up orange “Stop Trump” balloons.

One woman wore a pink knitted ‘pussy hat’ at the start of the Women’s March, which will be followed later in the day by the main “Together Against Trump” coalition.

Grant White, 32, carried a sign depicting Trump as the Twitter bird symbol wearing a swastika around his arm.

“I am anti-Brexit, anti-Trump. There is a wave of fascism which we have to get rid of,” he said.

Stopping outside May’s residence in Downing Street, protesters whistled and shouted: “Shame on you!”

May was the first foreign leader to visit Trump since his inauguration last year and extended an invitation for him to visit that proved highly controversial.

‘A juvenile in charge of a superpower’

Around 20 drag artists joined the protest, starting out from Soho – the historic heart of Britain’s gay community – in flamboyantly colourful attire.

“I think he’s just such a poor representation of what America has to give to the world,” said Joey ‘Bourgeoisie’ Frenette, 27, who moved to Britain eight years ago from Washington DC.

Frenette said he felt compelled to protest after seeing images of caged children in the US as a result of Trump’s immigration policies.

Choreographer Joshua Hubbard was strutting his displeasure at the president in knee-high red boots, a cravat and plenty of facial make-up.

“He’s perpetuated so many stigmas,” he said as he marched.

Londoners not protesting and stopping to take in the mass of people, placards and sloganeering seemed supportive of the demonstrations.

“He brings it on himself – it’s like having a juvenile in charge of a superpower,” said construction worker Dan Kelly, 47.

Her daughter said: “He doesn’t accept people who have a different religion in his country, where there is big diversity.”

Campaigners elsewhere in London flew a ‘Baby Trump’ balloon, an act of protest approved by London mayor Sadiq Khan which has proved particularly contentious for Trump and his supporters.

“As an American, I think it’s great. It’s a peaceful way of protesting and there are a lot of people who agree with it,” said Brett Kirchner, 25, from the US state of North Carolina.

Back home in the States, there will be some who are very upset about this protest and who think it’s insulting. I have been asked to send photos back though. Not everyone likes Trump.

Jason Caines, 50, said of the inflatable: “It’s good. It needs to be done because he’s a bigot and a racist. He shouldn’t be president, it should have been Hillary Clinton.”

Paul Fonseca, 23, said: “I think it’s hilarious. It’s an accurate representation of his politics which are so immature. He never enters into adult discussion.”

Trump will spend the remainder of the weekend in Scotland on a private visit that will likely take in 18 holes at one of the property magnate’s golf courses, where more protests are planned.