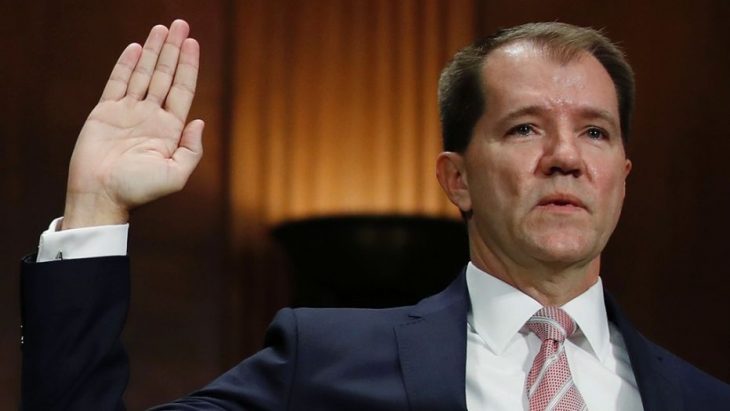 Could Don Willett be in contention to be the next Trump nominee to the U.S. Supreme Court?

Could Don Willett be in contention to be the next Trump nominee to the U.S. Supreme Court?

Say howdy to “probably the tweetingest judge in America, which, admittedly, is like being the tallest Munchkin in Oz.” That’s how Texas native Judge Don Willett describes himself on — what else — Twitter.

His social media meditations on hamburger buns, legal precedent, and even Donald Trump, have gained him an unusually high public profile, and perhaps because of this — or more likely in spite of — he’s become a White House favorite to replace Justice Anthony Kennedy on the Supreme Court.

The 52-year-old resident of Austin sits on the 5th Circuit U.S. Court of Appeals, having been nominated to the post last year by President Trump after service on the state’s high court. He is one of 24 judges — and Sen. Mike Lee, R-Utah, — on a list Trump has promised to rely to fill the current Supreme Court vacancy.

Willett was among seven finalists last year for the seat that ultimately went to Justice Neil Gorsuch. Sources say he was invited to Washington in January 2017 and met with members of the Trump team, including soon-to-be Vice President Mike Pence.

The judge brings a colorful past — he’s a onetime rodeo rider, among other things — with a creatively conservative jurisprudence. That consistent right-leaning record is what has attracted the White House’s notice.

Soon after his interview for the seat left vacant by the death of Justice Antonin Scalia, Willett was nominated to the federal bench. Sources say experience handling federal appeals would better prepare Willett for a Supreme Court seat, if so nominated.

He quotes Scripture, comic books, even Fox News. On Twitter, Willett linked to a 2014 story from this website — about a transgender high school student being allowed to join the girls’ softball team. It promoted this bit of Willett whimsy: “Go away A-Rod,” referring to former baseball star Alex Rodriguez, who had been suspended from the game for admitting to steroid use.

Most famous, or infamous, are Willett’s posts on then-candidate Trump. “‘We’ll rebuild the Death Star. It’ll be amazing, believe me. And the rebels will pay for it.’ —Darth Trump,” Willett tweeted in April 2016, with an accompanying photo of the “Star War” movie’s space weapon.

During his November confirmation, Willet told senators his attempts at humor can backfire and that he did not mean to demean the transgender student. “It’s always perilous to divorce text from context,” he said.

Sen. Patrick Leahy, D-Vt., also asked the nominee about another post where he ruminated on the Supreme Court’s landmark 2015 ruling legalizing same-sex marriage. Willett tweeted, “I could support recognizing a constitutional right to marry bacon.”

“It was my attempt to inject a bit of levity,” Willett said. “The country was filled with rancor and polarization. It was a divisive time in the nation.”

“Senator, I believe every American is entitled to equal worth and dignity,” Willett replied. “I’ve never intended to disparage anyone. I would never do so, that’s not where my heart is.”

Donny Ray Willett was born in tiny Talty, Texas (population 1,535) and was raised by a single mother who worked as a truck stop waitress. After law school, he eventually found his way to then-Gov. George W. Bush’s office, and later the Bush Justice Department, and White House as an adviser on religious-liberty issues.

Growing weary of Washington, Willett headed back home; he was eventually named to the Texas Supreme Court, and re-elected to the position in 2006 and 2012.

There he developed a reputation for sharply worded opinions in the conservative mold. His state high court only hears civil appeals, so his record there was somewhat limited. Nevertheless he found room to exercise his creative streak.

A 2015 concurrence on state regulations for eyebrow threaders brought this gem: “When it comes to restrictive licensing laws, just how generous is the constitutional strike zone? Must courts rubber-stamp even the most nonsensical encroachments on occupational freedom? Are the most patently farcical and protectionist restrictions nigh unchallengeable, or are there, in fact, judicially enforceable limits?”

Legal observers saw it as a clear slap at Chief Justice John Roberts’ famous 2005 belief that judges should act as baseball umpires — and call balls and strikes, not try “to pitch or bat.”

Willett is said to be an intellectual disciple of Scalia and his focus on “originalism,” the idea that statutory interpretation should be grounded in the original meaning of the Constitution, not adapted to changing social and legal forces.

In his state role, he defended displays of the Ten Commandments on public grounds; property rights in the face of government’s use of eminent domain and civil forfeiture; and upholding state limits on the rights of gay and lesbian couples.

Willett dissented two years ago when his court rebuffed efforts to allow government officials to defend then-current bans on same-sex marriage, even after the U.S. Supreme Court found such state laws unconstitutional.

“No matter the cause du jour, no matter the perceived exigencies, Texas law forbids the striking down of Texas law without first respecting the attorney general’s statutory opportunity — and constitutional duty — to defend it,” he wrote.

Since joining the 5th Circuit, Willett has written only two low-key opinions on criminal sentencing. That may give pause inside the White House as to whether the judge has enough of a “reliable” federal judicial record.

He has also kept a lower social media profile in recent months, while refusing to abandon it altogether. With a bit a populist rhetoric to match his outsize personality, he says there’s a method to his digital merriment.

“I think people find it astonishing that a fuddy-duddy judge can step out from behind the bench and come across as halfway engaging and demystify the judiciary,” he has said of his social media posts.