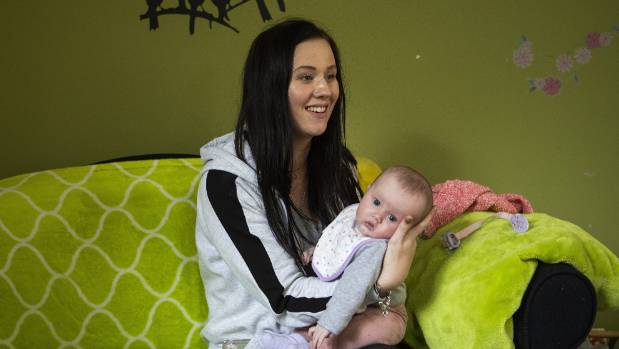 At 18, Grace Chuter balanced school, a part-time cafe job, a 40-minute commute and the care of her 2-year-old son Elijah – and all while pregnant.

“From the outside it looks like a lot,” she said – but the 19-year-old has been juggling those priorities since she was 15.

“My dad is a teacher so there was huge pressure to stay in education,” she said from the daycare at Karanga Mai Young Parent College in Kaiapoi, outside Christchurch.

“I knew I wasn’t going to be able to stay in school and here just fit really nicely.”

Four years on, she is one assignment away from completing her NCEA Level 3 and University Entrance, and plans to become a midwife.

Holding her 13-week-old daughter Kiara, Chuter said parenthood gave her a fresh perspective on her education: “I know now I’ve got a lot more to work for.”

For many of the roughly 800 students of 25 young parent colleges, or teen parent units (TPUs), across New Zealand such schools help them reclaim their mana from the stigma of teen parenthood and work towards tertiary study or employment.

But a report released on Thursday by the Education Review Office (ERO) paints a nuanced picture. While the overall performance of the country’s TPUs has improved since the last review in 2013, more than half have limited curriculum options and a lack of career planning for students, it says.

“ERO also observed some negative attitudes from staff towards students and their situation”.

Two more were of “serious concern”. Clendon Teen Parent Unit at Auckland’s James Cook High School and Pa Harakeke at Tokoroa High had bad data collection, “low quality teaching”, and poor relationships with their host schools and within the units themselves, the report says.

All had low retention rates – a quarter of students don’t stay more than three weeks – and one unnamed unit didn’t even have adequate kitchen and bathroom facilities.

“These highlighted issues are not specific to one or two TPUs; most are systemic challenges that require a systems-based response,” the ERO report says.

The effective TPUs made use of the expertise of teachers in their host schools to support its teachers and students: “Provision of high quality education for these vulnerable students requires a strong vision, commitment and shared responsibility.”

In 2016, 11 of every 1000 births were to teenagers – less than half of the 2008 rate. Still, New Zealand has one of the highest teenage birth rates in the OECD and pregnancy at a young age presents significant barriers to education.

Karanga Mai’s director Rachel Hawthorne said two vans head out at 7.30am each day to collect its students. Trying to catch a bus with a baby wassometimes barrier enough.

Classes were mostly academic but also included time for parenting queries, career planning and breastfeeding. The Open Polytech and Te Kura Correspondence School provided free classes, there were social workers, a nurse, a midwife, food banks and legal help available. Family support was “pretty variable, in terms of partners being on the scene”, Hawthorne said.

Success for the students can be as simple as growing self esteem.

“They’re learning parenting, and they’re learning NCEA but they’re also parents and caregivers and they carry a lot for their families,” Hawthorne said.

Brianan Thomsen, 17, said the community at Karanga Mai helped her through her post-natal depression after the birth of her six-month-old son Chase.

“I felt quite isolated and here I just feel so supported. It’s good having people on the same level. Being a young mum and juggling 100 things, it’s nice to have people who understand.”

The Association of Teen Parent Education (ATPENZ) declined to comment on ERO’s report. Chairperson Lee Marchioni said it will consider the findings at its national hui in August.