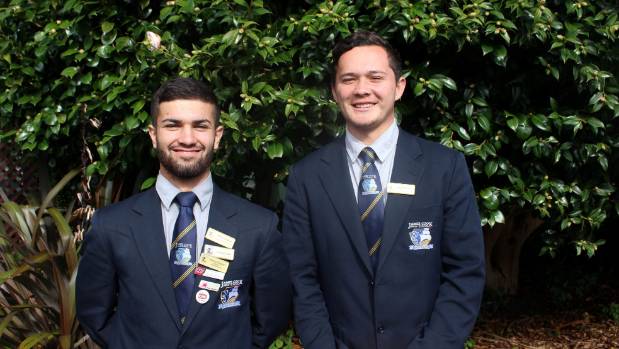 “Terrorist” and “fat” were some of the names Karoo Shakari was called growing up.

He’s now standing up to bullies at his school by being part of the anti-bullying campaign because he says students get bullied always and he “used to go through those things” and knows “what it’s like”.

“In intermediate, I was a really chubby kid. I got bullied for being fat. Just fat or terrorist is all I got called. Over time I got used to it.”

The James Cook High School deputy head boy used the criticism as motivation to get fit, “so, I started working out and I’m happy with myself”.

Joseph Green, prefect, says he too was bullied for a birthmark on his head.

He used to get teased for how it was a “bald patch or the barber stuffed up the haircut”.

“I’ve grown used to it. I don’t mind the names anymore … I don’t really care about it.”

Both the boys say sometimes the bullied person can become a bully because of being “sick of all the names, pushing” or even to “get some revenge”.

“The earlier you learn to be mature, the better.”

Head of guidance and wellbeing, Catherine Hawke has to deal with bullying issues every day.

When she started working at the Manurewa school two years ago, at first she was “surprised at how unkind people were to each other”.

But after she realised that “a lot of the young people come from distressed families, I was quite shocked at how kind they were to each other”.

“My campaign over the last couple of years has been around kindness and trying to have young people understand that you actually don’t know what’s going on in other peoples’ lives.”

Local band Swidt made an appearance during the anti-bullying week at the school and gave the kids a taste of their music, live. Hundreds of students gathered for the show.

Daniel Latu aka SPYCC from Swidt says he “hates” bullies.

Although he’s never been bullied, he says he’s seen the negative impact it has had on those that have been. If he ever witnessed some one being bullied, his first reaction would be to “intervene and stop it”.

“We need to stand together,” he says.