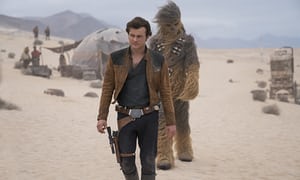 Solo: A Star Wars Story is a crackingly enjoyable adventure which frankly deserves full episode status in the great franchise, not just one of these intermittent place-holding iterations. Ron Howard was born to direct it. Who’s next for the saga? Zemeckis? Spielberg?

There’s a terrific ensemble cast-dynamic and an effortless channelling of the spirit of Episodes IV to VI from father-and-son screenwriting team Lawrence and Jonathan Kasdan who should really be allowed to get their teeth into the stories’ daddy issues and Freudian anxieties.

Solo: A Star Wars Story moreover has a glorious origin myth meet-cute to set up one of cinema’s greatest bromances: the stoic wookiee Chewbacca and the insolently handsome freebooting rebel pilot Han Solo – and Alden Ehrenreich absolutely crushes the role to powder, swaggeringly reviving the memory of the young Harrison Ford’s romantic gallantry. And there’s another meet-cute, come to think of it: the love that flowers between man and machine, between the reckless pilot and the sleekly iconic Millennium Falcon.

Ehrenreich’s Han is a handsome scallywag and cute no-goodnik who is oppressed like everyone else on a tyrannised planet. He is in love with beautiful Qi’ra (Emilia Clarke) and they plan to bribe officials with a stolen phial of ultra-valuable fuel crystal Coaxium to get smuggled out. Han makes it, Qi’ra doesn’t and Han swears to come back and find her someday. A few years later he’s a brilliant pilot who has been booted out of the imperial fleet for insubordination, and has made common cause with a notorious thief, Tobias Beckett (Woody Harrelson) who with his associate Val (an underused Thandie Newton) works for a terrifying crime boss, Dryden Vos (Paul Bettany). That’s right: the two intergalactic male robbers are called Beckett and Dryden. I like to think the Kasdan screenwriting team also experimented with Pinter and Davenant, and Stoppard and Marvell before settling on those.

And Han also chances across a charismatic dandy-ish smuggler, gambler and flier called Lando Calrissian, a very funny performance from Donald Glover. It is Lando who is the owner of the Millennium Falcon, but sporting man that he is, Lando is willing to bet his beloved craft on a hand of cards with the wily Han. Phoebe Waller-Bridge has an entertaining voice role as Spartacist droid L3-37. Most importantly, Han has his first encounter with the prototypical Allied resistance against the Empire.

But wait. To his astonishment, Han is to come face-to-face with Qi’ra again at one of Dryden’s sophisticated parties. Of all the interplanetary cocktail events in all the galaxy she had to walk into this one. There’s a spark between them still. But she’s no longer the fresh-faced girl he knew. Now she’s a beautiful, formidable woman – and the kept girlfriend of Dryden. Can Han save her from this?

But the main event is of course the meeting of Han and Chewie, at this stage 190 years old and condemned in this movie series to a Dorian-Gray-type eternal youth. Han has been thrown by an angry army officer into a muddy pit, there to die at the hands of a chained “monster” – Chewie. Of course Han speaks the language: that extraordinary gargling groan, that bestial vocal fry that makes Chewie’s voice so unmistakable. Their wacky staged fight is a beguiling moment as Han fixes to break Chewie free to become his pal and wingman in so many senses.

Solo: A Star Wars Story reshuffles the accepted component myth-parts in a way that some find overfamiliar: there are desert scenes, weirdo cabaret acts. But I found it purely lovable. With Howard at the controls, the movie is a fun-fuelled entertainment.