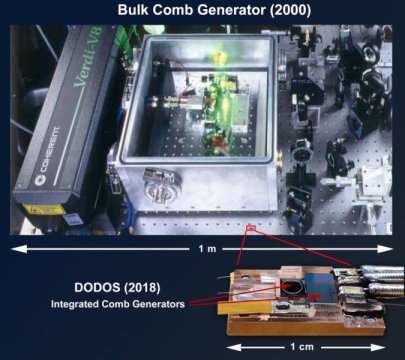 Engineers team up to reduce the size, cost and power requirements of an optical frequency device.

Only a few decades ago, finding a particular channel on the radio or television meant dialing a knob by hand and then making small adjustments to hone in on the right signal. That’s no longer the case, thanks to something called a radio-frequency synthesizer, which generates accurate signal frequencies.

“We took something that occupied a whole optical bench, weighed 50 pounds and used a kilowatt of power and made it orders of magnitude more efficient by integrating the key elements onto silicon photonic integrated circuits,” said Bowers, UCSB’s Fred Kavli Chair in Nanotechnology and director of the campus’s Institute for Energy Efficiency.

Optical frequency synthesizers have proven extremely valuable in a variety of scientific endeavors, from searching the skies for far-off planets to detecting chemicals through sensitive laser spectroscopy and enabling high-precision light detection and ranging (LIDAR) by using light as a ruler to measure distance.

“The development of optical frequency synthesis has significantly enhanced our ability to accurately and precisely measure time and space,” said Gordon Keeler,the DARPA program manager leading DODOS. “However, our ability to leverage the technology has been limited. Through DODOS, we’re creating technologies that will enable broader deployment and unlock numerous applications. The goal is to shrink laboratory-grade capabilities down to the size of a sugar cube for use in applications like LIDAR, coherent communications, chemical sensing and precision metrology.”

Combining a pair of frequency combs, several miniature lasers and other compact optoelectronic components, the researchers were able to replicate the capabilities of a tabletop optical frequency synthesizer on three microchips, each less than 5 mm x 10 mm in size.

Theogarajan and his students designed and developed electrical integrated circuits to control the synthesizer, which can tune over 50 nanometers and deliver a frequency stability of 7 x 10-13 after one second of averaging — matching that of the input reference clock. A stable clock is important.

“The more accurate the clock is, the better you can resolve distance or velocity or do navigation,” Bowers explained. “GPS has a certain resolution. Your phone will locate you to within a few meters. But if you had a better, more stable clock, you could triangulate more precisely and get better resolution. It’s called PNT, for ‘precision navigation and timing.’”

The scientists created the two miniaturized frequency combs by circulating laser light generated with single-color “pump” lasers around optical racetracks fabricated on silicon chips. Doing so correctly can produce many additional colors, yielding a spectrum that looks like a hair comb where each “tooth” is an individual color or frequency. This is a significant departure from the tabletop version of an optical frequency synthesizer, which uses fiber optics, specialized mirrors and large mechanical components built by hand to achieve a similar effect.

The DODOS program is entering its final phase, during which researchers will work to integrate the individual components with electronics and fabricate a compactly packaged device suitable for use in future military and commercial optical systems. The synthesizer could have applications in navigation, spectroscopy and astronomy.

The goal, Bowers noted, is to make this very precise miniature laser cost almost nothing.

Materials provided by University of California – Santa Barbara. Original written by James Badham. Note: Content may be edited for style and length.