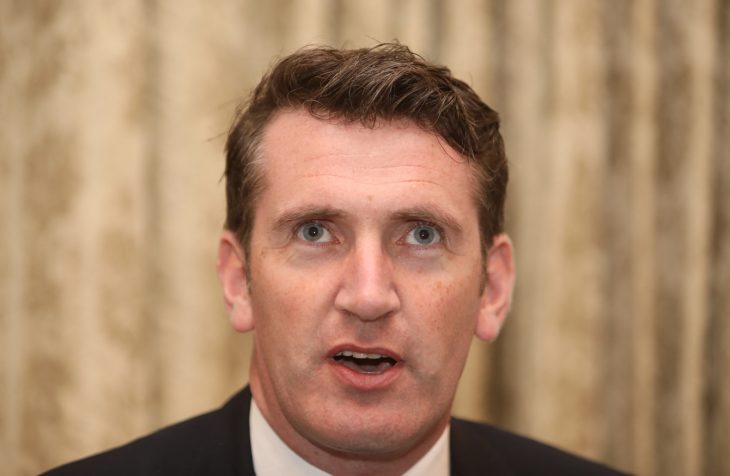 The boycott is in response to the policy of separating children from their parents at the US border.

LABOUR SENATOR AODHÁN Ó Ríordáin has called on Oireachtas members to boycott 4th of July celebrations at the US Embassy in Dublin, in light of the family separations policy at the US border.

Ó Ríordáin says all TDs and Senators should refuse the invitation to a 3 July event at the Ambassador’s Residence in the Phoenix Park and inform the Embassy of the reason for their non-attendance.

”Every member of the Oireachtas would have gotten this invitation from the Chargé d’Affaires of the American Embassy in Dublin,” Ó Ríordáin, a former junior minister, told reporters at an event this morning.

”Collectively I think that the Chargé d’Affaires should be informed as to the reason why members of the Oireachtas should not attend this reception to celebrate the 4th of July when this is going on at the US borders.

”There is no reason to play party politics with this issue, it’s too important. The idea that you would drink champagne or eat sausage rolls on the 4th of July would be unthinkable with what’s going on.”

The invitation for United We Rock, the 4th of July celebration being held at the US Embassy in Dublin

The Senator displayed his invitation to the event, entitled United We Rock, taking place on the evening of 3 July. Ireland has been without an ambassador since the start of last year, and a Chargé d’Affaires currently heads up the US diplomatic mission here.

The US Embassy in Dublin responded to the Senator’s call with the following statement:

The United States of America respects the freedom of individuals to express their opinions and their right to peaceful protest.

Also speaking at Ó Ríordáin’s event this morning, Fiona McEntee, a Chicago based US Immigration lawyer said that Irish politicians should not be ”celebrating the policy of ripping children from their parents at the border”.

”We’re hearing reports that there are children in cages, they’re basically being detained away from their parents.”

Other TDs have also been critical of the current US policy. Speaking in the Dáil yesterday Solidarity-People Before Profit TD Ruth Coppinger TD asked that the Taoiseach withdraw his invitation to visit Ireland from US President Donald Trump.

”We need this Parliament to send a message that we do not agree with this policy,” Coppinger said.

Speaking today, Fiona McEntee insisted that there was no law that required the separation of families at the US border.

”Congress has passed no new laws about immigration in a long time, so how they can say a new law has been passed, I don’t know.

”People need to know the truth because there are so many false statements out there, hopefully, we can shed a bit of light on the situation.”

The practice of separating children from their parents has been largely attributed to a “zero tolerance” policy instigated by President Donald Trump aimed at deterring the thousands of people who cross the border illegally into the US each and every month.