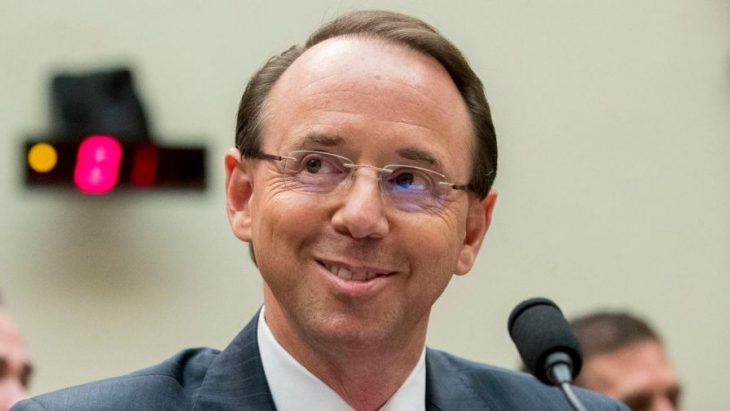 GOP lawmakers grill the deputy attorney general on Capitol Hill on his involvement in the probe.

GOP lawmakers grill the deputy attorney general on Capitol Hill on his involvement in the probe.

Deputy Attorney General Rod Rosenstein is the target of an impeachment effort being undertaken by conservatives in the U.S. House of Representatives, according to a report.

U.S. Reps. Mark Meadows, R-N.C., and Jim Jordan, R-Ohio, both members of the House Freedom Caucus, are said to be leading the effort and could submit an impeachment filing in the next few days, Politico reported Friday.

Rosenstein has been clashing with some House Republicans for months over requests for Department of Justice documents, the Washington Examiner reported. The deputy AG oversees Special Counsel Robert Mueller’s investigation into possible collusion between the 2016 Trump campaign and Russia.

On Thursday, the New York Times reported that the White House ordered that more members of Congress receive access to classified information about an FBI informant linked to the Russia probe, despite objections from U.S. intelligence and law enforcement officials.

It was Rosenstein who named Mueller to lead the Trump-Russia probe after Rosenstein’s boss, Attorney General Jeff Sessions, recused himself from the investigation because of Sessions’ own role in the Trump campaign.

Politico’s story on the possible impeachment filing against Rosenstein came on the same day that Rosenstein announced Mueller’s 12 indictments against Russian military intelligence officials on charges linked to the 2016 U.S. presidential election.

Speculation that President Donald Trump might fire Rosenstein increased in April, after FBI agents conducted raids at the office and home of Michael Cohen, the president’s former personal attorney, the Hill reported.