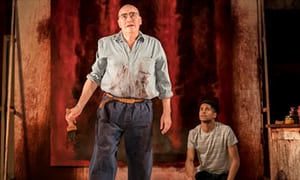 Wyndham’s, London
Michael Grandage directs a well-judged revival of John Logan’s play about the artist and his assistant

‘Make something new,” the painter Mark Rothko urges his young assistant in John Logan’s play. One is tempted to say the same to the play’s director, Michael Grandage, except that there are several justifications for reviving this piece. In 2009 it moved straight from the Donmar to Broadway, bypassing the West End; it enshrines a towering performance from Alfred Molina; and it is one of the few plays that offers a plausible portrait of an artist at work.

We are in Rothko’s Bowery studio in the late 1950s after he has been commissioned to paint a series of murals for the ritzy Four Seasons’ restaurant in New York’s Seagram Building. His assistant, Ken, is there to mix paints, stretch canvases, fetch coffee and listen to Rothko’s dogmatic utterances and raging paranoia about the art establishment.

“Ten per cent of one’s time,” says Rothko, “is putting paint on canvas – the rest is waiting.” And while they wait, we see the gauche apprentice turn from humble sounding board into fierce spokesman for the future.

Just as Rothko’s paintings are about the tension between blocks of colour, so the play itself is about opposing views of art. The rabbinical Rothko stands for a belief in the quasi-religious, tragic, timeless nature of painting; Ken argues for the urgently contemporary and rashly embraces the emerging pop art of Lichtenstein and Warhol. While this leads to fruitful debate, and yields telling aphorisms such as Rothko’s “To surmount the past you must know the past”, it also raises serious doubts. Seeing the play again, I wondered if the explosive Rothko would really have tolerated an assistant who attacked his “titanic self-absorption” and cultural irrelevance.

The delight of the piece, however, is its ability to balance theory and practice. In Christopher Oram’s design, the studio really does look like a workspace, and the highlight of Grandage’s production is still the moment when Rothko and Ken take a blank canvas and slap on an undercoat. The two men go at their task like demons and at one point, applying layers of paint horizontally, achieve a physical harmony that totally belies their intellectual rivalry.

Returning to the role of Rothko, Molina also suggests flickers of self-doubt beneath the iron certainty. Molina has a bullish physique, lays down the law like an aesthetic tyrant and, at the mere mention of Warhol, averts his gaze with silent disdain.

But the virtue of Molina’s performance is in suggesting Rothko knows full well that, in painting murals for a swish eaterie, he is betraying his own ideals. The performance is as layered as a Rothko canvas and reminds me of Robert Hughes’ argument that the more Rothko attacked the art world, the more it praised him, and that his suicide was the climax of “his long preparation for a failure that eluded him”.

Alfred Enoch captures exactly Ken’s progress from sorcerer’s apprentice to articulate opponent, and wittily scores off Rothko by reminding him that, just as the abstract expressionists waged brutal war on the cubists, so they too are now being overturned. Even if I couldn’t always believe that the studio would have housed such suavely phrased arguments, the play offers an invigorating 90 minutes and shows Rothko’s ability to paint the town his own sombre form of red.