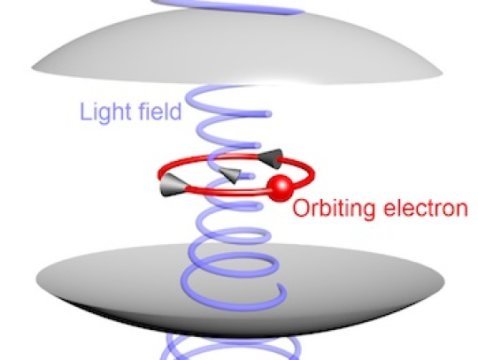 Researchers observe and measure a Bloch-Siegert shift in strongly coupled light and matter in a vacuum. The project could aid in the development of quantum computers.

A team led by Rice University scientists used a unique combination of techniques to observe, for the first time, a condensed matter phenomenon about which others have only speculated. The research could aid in the development of quantum computers.

Results of the complicated combination of modeling and experimentation are the subject of a paper in Nature Photonics. The technique could lead to a greater understanding of theoretical predictions in quantum phase transitions because the experimental parameters used in the Rice experiments are highly adjustable, according to Kono. Ultimately, he said, it may help in the development of robust quantum bits for advanced computing.

The Bloch-Siegert shift, a theory born in the 1940s, is a quantum interaction in which counter-rotating fields are able to interact. But such interactions have been difficult to detect.

The theory suggested to Kono and Li that it might be possible to detect such a shift when a light field rotating in one direction strongly couples with a matter-bound electron field rotating in the opposite direction. These interactions have proven difficult to create without the unique tools assembled by the Rice-led team.

“Light and matter should not resonate with each other when they are rotating in opposite directions,” Kono said. “However, in our case, we proved they can still strongly couple, or interact, even though they are not resonating with each other.”

Kono and his colleagues created the resonance frequency shift in a two-level electron system induced by coupling with an electromagnetic field inside a cavity even when the electrons and field are rotating in opposite directions — a truly surprising effect that occurs only in a regime where light and matter are mixed together to an extreme degree.

In this case, the levels are those of two-dimensional electrons in solid gallium arsenide in a strong perpendicular magnetic field. They hybridize with the “vacuum” electromagnetic field in the cavity to form quasiparticles known as polaritons. This vacuum-matter hybridization had been expected to lead to a finite frequency shift, a vacuum Bloch-Siegert shift, in optical spectra for circularly polarized light counter-rotating with the electrons. The Rice team can now measure it.

The research builds upon a strong vacuum field-matter coupling in a high-quality-factor cavity the lab first created and reported in 2016. The results at the time only hinted at the presence of a Bloch-Siegert shift. “Experimentally, we just demonstrated the new regime,” Li said. “But here, we have a very deep understanding of the physics involved.”

Kono and Li credited physicist Motoaki Bamba of Osaka University for providing a theoretical basis for the discovery and Katsumasa Yoshioka of Yokohama National University and a former visiting scholar at Rice for providing a device to produce circularly polarized light in the terahertz range of the electromagnetic spectrum.

The lab used the light to probe the shift in an ultra-high quality, two-dimensional electron gas supplied by Purdue University physicist Michael Manfra and set in a gallium arsenide quantum well (to contain the particles) under the influence of a strong magnetic field and low temperature. A terahertz spectroscope measured activity in the system.

“Linearly polarized light means an alternating current electric field that is always oscillating in one direction,” Kono said. “In circularly polarized light, the electric field is rotating.” That allowed the researchers to distinguish between left- and right-rotating electrons in their vacuum-bound condensed matter in a magnetic field, and from that, measure the shift.

“In this work, both theoretically and experimentally, we demonstrated that even though the electron is rotating this way and the light is rotating (the other) way, they still strongly interact with each other, which leads to a finite frequency shift known as the Bloch-Siegert shift,” Kono said.

Materials provided by Rice University. Note: Content may be edited for style and length.