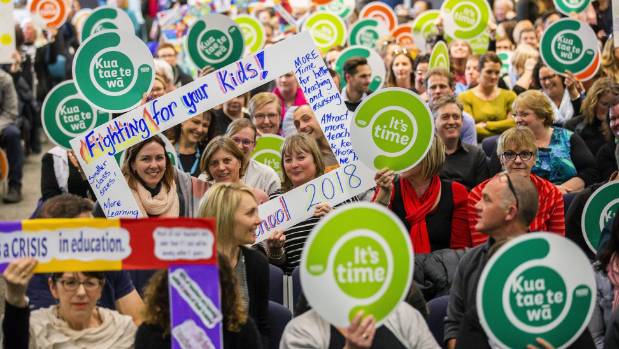 Primary school teachers and principals will strike – their first industrial action in New Zealand since 1994 – after rejecting a pay offer from the Government.

The New Zealand Educational Institute (NZEI), which represents about 27,000 primary school staff, said members voted “overwhelmingly in favour” of a half-day work stoppage in August, and are now discussing whether to extend the strike to a full day.

The Ministry of Education offered pay rises over three years ranging from 6.1 per cent at the top of the pay scale – making the maximum salary about $80,600 – to a 14.7 per cent rise on the entry salary of $47,980 for university trained teachers, bringing it to $55,030.

The teachers’ union had asked for a 16 per cent pay rise over two years, among other claims to improve staffing and workloads it says have contributed to a national teacher shortage.  .

Ministry spokeswoman Ellen MacGregor-Reid said the ministry was disappointed NZEI members had rejected previous offers and that “strike action is being discussed while negotiations are ongoing.”

According to ministry figures retention of principals and teachers had increased slightly over the last four years and were now at 95.4 per cent  and  93.8 per cent respectively.

The union’s announcement on Tuesday was the result of votes taken at paid union meetings across the country last month, where many members said a three-hour stoppage “did not send a strong enough message”, lead negotiator Liam Rutherford said.

NZEI was now asking for members’ feedback on whether to extend the strike, planned for 1.30pm to 4.30pm on August 15. Teachers would hold meetings during the stoppages to consider any further offers.

The lead negotiator for principals, Louise Green, said they needed to act now “to avert the very real threat of larger class sizes within just a few years”.

The Post Primary Teachers’ Association (PPTA) is also in pay negotiations with the Government. Members had endorsed the union’s claim for a 15 per cent pay rise at meetings held last month.