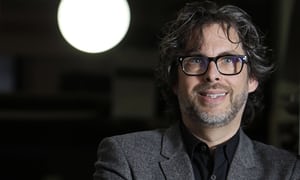 The prolific and prizewinning novelist reflects on the pram in the hall, what children can teach fathers and a trip to Paris men’s fashion week

A year before he published his first novel, Michael Chabon met a famous author at a literary party. This man, who was twice Chabon’s age, offered him some unsolicited advice. “Don’t have children,” he said. “That’s it. Do not. That is the whole of the law.” He went on to explain how, after one book, there would be a second that would inevitably be more difficult and unwieldy than the first, and would probably bomb. A third would nonetheless be expected, followed by a fourth, fifth and sixth, and so on for as long as his “stubbornness and luck held out”. All this would happen, he said, unless Chabon made the same fatal mistake as so many fledgling writers before him. “You can write great books,” he said. “Or you can have kids. It’s up to you.”

Twenty years later, Chabon – novelist, short story writer and proud father of four – has turned their exchange into an essay called The Opposite of Writing, the first in this warm, whimsical and elegantly observed collection. Chabon, who won a Pulitzer prize for fiction in 2001 for The Amazing Adventures of Kavalier & Clay, is too generous a writer to take a yah-boo-sucks approach to this author, whose intentions, despite the tone of condescension, were seemingly decent. Instead he uses it as a springboard to pondering the perceived problem that is the pram in the hall.

At the time of their conversation, Chabon was a month away from marrying his “future ex-wife”. Four years later, and without children, they divorced and he married the writer Ayelet Waldman. As their family has multiplied, he has written 14 books, though there are times when he has wondered: “Should there be eighteen?” After a rough day at the keyboard, when the words won’t come in the way that he wishes, he finds himself in “a kind of mourning for the loss of those other, phantom-limb novels, the ones that my children stole”. But Chabon is nothing if not a realist, and, despite his many literary successes, is not one to romanticise his job.

Pops, then, is for him another in a long line of books that, once published, will refuse to reciprocate the time and nurturing poured into them. It is not, it should be noted, a misty-eyed treatise on the miracle of life, or a parenting manual dispensing solemn advice about how best to steer one’s offspring towards a rich, rewarding adulthood. Yet it stands as a heartfelt and thoughtful meditation on what parenthood asks of a man. Rather than focusing on the next generation, the book is about the experience of being in the previous one, and observing one’s slow-burning irrelevance. In Chabon’s view, irrelevance is a worthwhile price to pay in exchange for those sweet moments of intimacy and bonding where, in so many instances, children show us something about ourselves.

The book began life in 2016 as an article in GQ magazine for which Chabon was dispatched to write about Paris men’s fashion week. He took his youngest son, Abe, with him on the assignment as a bar mitzvah present. Abe was 13 at the time and, thanks to his older brother, was already deeply into clothes, though he had long superseded his sibling in terms of style, knowledge and enthusiasm. In the essay, Chabon takes the role of Abe’s “ponderous old minder”, gawping in bemusement at models prowling the catwalk in shaggy yellow Muppet pants, enormous sneakers and with bored expressions. By the end of the week, he was none the wiser about fashion, but the scales had fallen from his eyes regarding his son and his greatest obsession:

Abe had not been dressing up, styling himself, for all these years because he was trying to prove how different he was from everyone else. He did it in the hope of attracting the attention of somebody else – somewhere, someday – who was the same. He was not flying his freak flag; he was sending up a flare, hoping for rescue, for company in the solitude of his passion.

Elsewhere, in the chapter Adventures in Euphemism, Chabon recalls reading The Adventures of Tom Sawyer at bedtime with his children, and prevaricating over the use of the N-word; in Against Dickitude, in which he observes his son’s abruptness via text towards a girl, he wryly expounds on his own rock-strewn path to kindness and empathy towards the women in his life. While no great parenting secrets are uncovered in this slim volume, Chabon has a knack of locating the fundamentals of the parent-child relationship in the innocuous and the everyday. Pops is not about what we should be teaching our children but the ways in which our children teach us. That, contrary to the edict of his would-be mentor in the opening chapter, they can also provide the writer with a book’s worth of material is, one imagines, merely a bonus.