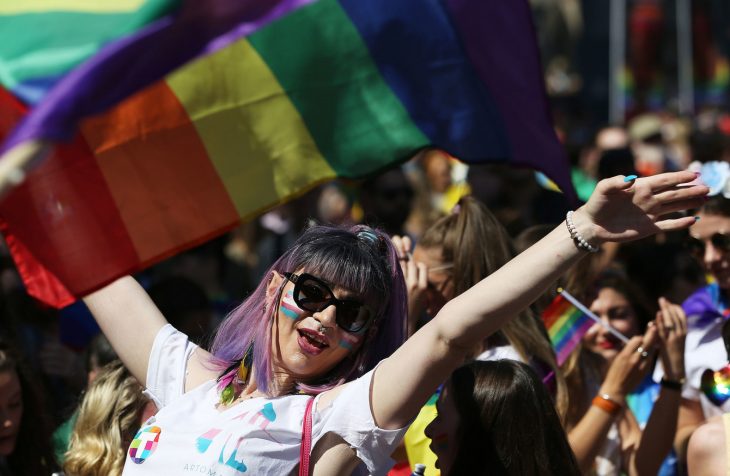 The streets of Dublin city centre were thronged with people from the early afternoon.

THOUSANDS OF PEOPLE have turned out in Dublin to celebrate and march in the city’s annual Pride Parade.

The streets of Dublin city centre were thronged with people from the early afternoon, many decked out in rainbow colours.

The parade began at Stephen’s Green with a number of speeches before crowds marched on to Smithfield, where a stage was set up and speakers included former president Mary McAleese.

Among those marching were members of the Defence Forces, who marched for the first time in uniform.

Members of the Defence Forces during the Pride Parade in Dublin.

The parade – which for the last few years has drawn huge crowds as well as widespread political and social support – is now a mainstay of Dublin life, with up to 30,000 people taking part last year.

The first Pride Parade took place in 1983, when just about 200 people took part.

This year’s parade takes place 25 years after Ireland decriminalised homosexuality. The theme of the parade is “We are family”.

Last week, Taoiseach Leo Varadkar officially apologised on behalf of the Irish state to men who were convicted of engaging in consensual same-sex activity prior to the decriminalisation.

Minister for Health Simon Harris takes part in the Pride Parade in Dublin.

In 2015, the country also voted in an historic referendum to legalise same-sex marriage.

Commercial support and presence for the parade has increased in recent years as it has become more mainstream – with many companies taking part.

Irish Defence Forces Chief of Staff Vice Admiral Mark Mellett tweeted his support for the parade today and the members who took part.

Speaking from the parade, Sinn Féin leader Mary Lou McDonald said that the party would continue to campaign for marriage equality in Northern Ireland as a matter of priority.

People gather for the start of the Pride Parade in Dublin.

“The people here, the people of pride are an unstoppable force. Rights are for all. Equality is for all. Change is coming and make no mistake the North is next,” she said.

There was widespread traffic disruption throughout the city centre as the parade took place. A number of venues across the city are holding events this evening which are likely to continue long into the night.