WATCH: Federal immigration minister, Ontario minister blast each other for ‘lack of cooperation’

WATCH: Federal immigration minister, Ontario minister blast each other for ‘lack of cooperation’

The Ontario cabinet minister responsible for immigration has demanded an apology from federal Immigration Minister Ahmed Hussen, who she says called her “un-Canadian” in attempts to “bully” her into accepting the federal government’s line on immigration.

The remarks came after MPP Lisa MacLeod said the province of Ontario would not join the communique signed at a meeting of federal, provincial and territorial ministers in Winnipeg.

Following the meeting, Hussen told reporters it was “unfortunate” that Ontario was not part of the communique, which called for a collaborative and long-term effort to improve the immigration system.

He made the comments as MacLeod sat at the back of the room instead of standing alongside Hussen and other ministers responsible for immigration on the podium.

“I see the minister is in the room but not joining us at the podium,” Hussen said, addressing MacLeod. “It’s not too late, minister, I encourage you to come join us, you’re part of the Canadian family.”

“Intentionally doing this is irresponsible, it’s divisive, it’s fear mongering and it’s not Canadian and it is very dangerous.” 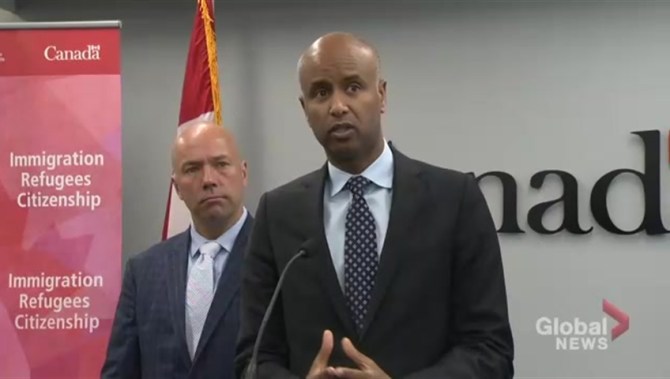 Once Hussen and other ministers left the room, MacLeod took to the podium to rebut Hussen’s remarks.

“When I challenged the federal minister of immigration on some of the issues that we’re confronting in Ottawa, the exchange became testy and I chose to leave the meeting,” she said.

MacLeod said Ontario is in dire need of assistance from the federal government as it tackles expenses associated with handling refugees and asylum seekers.

She said Toronto and Ottawa have requested $75 million and $11 million respectively, while the province of Ontario has incurred costs of $90 million in support services for refugee claimants who crossed the border illegally and sought asylum.

Hussen has been non-committal on about whether additional funding is forthcoming, saying in Halifax earlier this week that he’s “perplexed” by the request at a time when the province hasn’t committed to help Ottawa with a plan to redirect migrants to temporary shelters outside of Toronto.

MacLeod, who is also the Minister Responsible for for Women’s Issues and Minister of Children, Community and Social Services, accused Hussen of trying to intimidate her when she was “simply asking them to fix the problems that they have created with their federal policies.”

“I was expecting that we would be able to collaborate on that; instead, what I saw today was an attempt of [Hussen] calling me un-Canadian, which I take great offence to and I hope he will apologize and reconsider his language. I also won’t be bullied into accepting what the federal government is doing because we do have severe and significant challenges [in Ontario],” said MacLeod.

And then he called her unCanadian @MacLeodLisa No money and no solutions for the crisis they created. pic.twitter.com/zbR12A8jOS

“I found his comments were very divisive, I thought his comments were actually mean-spirited towards me personally and I didn’t appreciate that. I think that his rhetoric is unhelpful and [that] he wants to avoid actually writing me a cheque for $175 million is what I got out of that.”

MacLeod concluded with another demand for apology.

“I think maybe the minister should sit down, have a nice cup of tea, calm down a little bit and maybe phone me and apologize for calling me un-Canadian.” 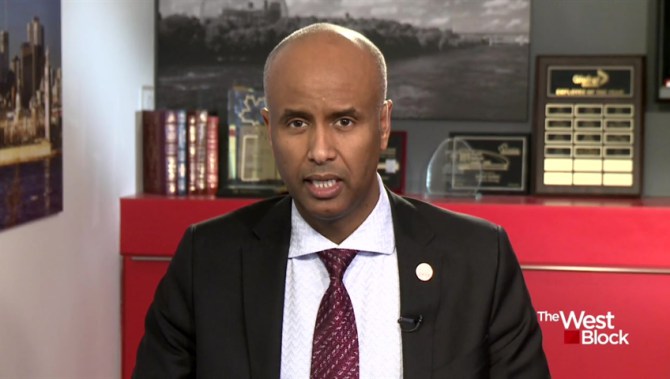 “He is a bully, who tries to shut down scrutiny of Trudeau’s failure to address the illegal border crossing crisis with name calling, insults, and condescension. This is no way to build a compassionate immigration system,” Rempel wrote.

Thread: In #Winnipeg to meet with Provincial & Territorial counterparts. We discussed how to continue to use immigration to grow our economy and our government’s clear plan to manage irregular migration.

Canadians 🇨🇦 expect all levels of government to work together. 1/6 pic.twitter.com/TobmzKP0HB

MacLeod also found support from her Saskatchewan counterpart Jeremy Harrison, whose province also didn’t sign on to the communique. Harrison said the Saskatchewan government held firm in its position that the federal government fund supports for asylum seekers.

“Canada has yet to follow through on a commitment to fully support refugee transition and there is now added pressure for provinces to also support asylum seekers.”

— With a file from The Canadian Press