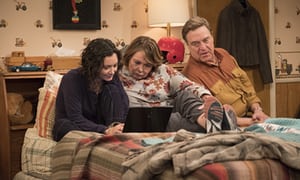 In the opening titles of Roseanne, we see the Conner family sitting around a table together, laughing, squabbling, eating, and generally loving one another. Since it began in the late 1980s, Roseanne has presented a tough yet tenderhearted image of the white midwestern working class. The Conners may not have had money or power, but they were presented as complete people, rather than simply stereotypes. Not only that; they were also, despite their economic hurdles, pretty happy, even if they weren’t Hollywood perfect. At the end of the title sequence we always hear the same thing: Roseanne’s giant, loud, and completely joyful laugh.

The 2018 reboot features the same lovable cast 20 years later, a little older but not necessarily wiser, and now clearly divided along political lines. The Roseanne of the new series is a Trump supporter, while her sister Jackie is pro-Hillary. In the first episode, we see how their political differences are creating a wedge between them. Though they throw barbs at one another, what we ultimately see is a reconciliation. Neither “deplorable” nor “snowflake” changes the other’s beliefs, but they agree to put family above political differences, and eventually come together with a hug.

This aspect of the Roseanne revival will probably strike many liberal viewers as a kind of betrayal, urging against resistance in favor of reconciliation. In the Atlantic, Megan Garber argues that the reboot flattens political difference and moves away from the kind of gritty realism that defined the Roseanne of the 80s and 90s. “Roseanne didn’t need to be partisan, in other words, because Roseanne was content to be political,” she says. In the Washington Post, Hank Stuever asks if 2018’s Roseanne will be “this generation’s Archie Bunker”, referring to the famously bigoted character in All in the Family.

And yet, there is no evidence to suggest that the Roseanne reboot excuses bigotry. In the new show, Roseanne is depicted as outspoken and funny (she tells her husband he owes her $200,000 when she learns that her daughter could make $50,000 as a surrogate) as well as brash and insensitive (she builds a shrine to her sister when they stopped speaking after the election, claiming she is dead to her). But new Roseanne, like the old Roseanne, doesn’t rail against marginalized groups or express hateful sentiments. Instead, we see her hugging her black granddaughter, and we see an entire episode devoted to Roseanne and Dan accepting and supporting their grandson’s desire to wear colorful, gender-fluid clothes, including skirts, jewelry and nail polish.

This more nuanced portrait helps to humanize the white working class who voted for Trump, but it sometimes does so by making racism, xenophobia and sexism invisible. When Roseanne jokes that Jackie should “take a knee” while she says grace, it’s meant to be a throwaway gag, rather than a statement on civil rights. When Roseanne and Dan learn to accept their grandson just as he is, it’s framed in terms of school bullying, rather than the very real threats that LGBTQ communities face. This isn’t to say that there shouldn’t be jokes in a family sitcom, but to point out that these moments also lack the authenticity that was central to the show’s appeal. In contrast, in these early episodes,class and economics are depicted as more real and pressing than issues of culture, which can be solved by coming to the table rather than duking it out in the voting booths.

Perhaps this will change as the season progresses. The original Roseanne generally did a fantastic job of promoting realism, while also pushing characters to step out of their comfort zones, approaching topics like periods, contraception, adultery and racism with sensitivity and nuance, as well as humor. In an interview with the Hollywood Reporter, the show’s actors and writers discuss their intention to continue conversations that started in the original series.

For example, the fact that DJ has a black daughter in the reboot is a direct reference to season seven, where Roseanne and Dan contend with their middle-school age son refusing to kiss a little black girl for a school play. Throughout the episode, we see how the Conners are taking stock of their own prejudices and working to grow and change. “I like diversity,” Barr says, as she discusses the choice to continue DJ’s storyline in the reboot “and it’s so much a part of the working class where it is not so much part of middle-class stuff.” In the same interview, co-showrunner Whitney Cummings observes that writing for a cast of characters who are outside of your bubble can be tough: “I learned it’s not about what we would say; it’s about what they would say.”

The challenge of rebooting Roseanne in this moment of political and social unrest is also its potential promise. In 2005, Roger Ebert made a moving statement when receiving a star on Hollywood’s Walk of Fame:

“Movies are the most powerful empathy machine in all the arts. When I go to a great movie I can live somebody else’s life for a while. I can walk in somebody else’s shoes. I can see what it feels like to be a member of a different gender, a different race, a different economic class, to live in a different time, to have a different belief. This is a liberalizing influence on me. It gives me a broader mind. It helps me to join my family of men and women on this planet. It helps me to identify with them, so I’m not just stuck being myself, day after day. The great movies enlarge us, they civilize us, they make us more decent people.”

Ideally, television affords us this same possibility of transformation, not just representing us as we are, but pushing viewers to see beyond our own experiences. What I’d love to see the new Roseanne dig deeper into is how empathy for the “other” is often a heck of a lot riskier than empathy for the people we break bread with every single day. I hope the show will tackle how the current cultural climate is not only disrupting family dinners, but is also deeply hindering our ability to empathize with people who are different.

Doing that may mean moving away from the nostalgic comforts of the trusty family couch and taking steps into a world that has evolved since the 80s and 90s. While Walmart jokes abound, the world of the Conners is surprisingly lacking in technology, especially social media, one of the things that has changed the most since the original series. Surprisingly, one of the most ubiquitous aspects of the Trump era is all but missing – there is an Uber reference, but there isn’t a tweet or hashtag in sight.