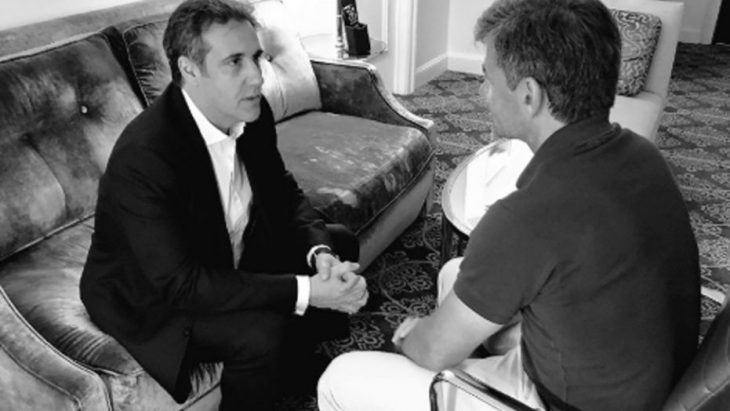 President Trump’s former personal lawyer Michael Cohen on Sunday tweeted that he sat down for an interview with ABC’s “Good Morning America,” and proclaimed: “My silence is broken!”

Cohen did not go into any details about the “not on camera” interview with George Stephanopoulos, but posted a black-and-white picture of the two sitting together. The interview is set to be revealed on Monday, the tweet read.

Federal prosecutors in New York have publicly said they are investigating alleged fraud in Cohen’s business dealings, but haven’t disclosed details. He became a household name when it was revealed that he paid Stormy Daniels $130,000 to promise not to discuss an alleged sexual encounter with Trump before the election.

My family & I are owed an apology. After 2 years, 15 hours of testimony before House & Senate under oath & producing more than 1000 documents, dossier misreports 15 allegations about me. My entire statement must be quoted- I had nothing to do with Russian collusion or meddling!

Cohen has been coy on Twitter in the past.

He cited Buddha, writing that “three things cannot be long hidden, the sun, the moon, and the TRUTH,” and has also asked for an apology for the extent of “misreports” and allegations made public. He tweeted on June 28, “I had nothing to do with Russian collusion or meddling!”

Rudy Giuliani, an attorney for Trump, earlier this month tried to put to rest claims that Cohen might cooperate with special counsel Robert Mueller’s investigation.

“It’s not so. He’s not cooperating nor do we care because the president did nothing wrong,” he said. “I am absolutely certain of that.”

When asked if the Trump team was worried that Cohen may have tape recordings that exist without their knowledge, Giuliani was firm that the president was and is “clean as a whistle.”

Michael Avenatti, the lawyer for Daniels, responded on Twitter, “If Mr. Cohen really gave an “off camera” interview to @GStephanopoulos (whom I respect) for @GMA, he is dumber than I thought. He is playing games & trying to play both sides. There is only one way he can have any legitimate shot at saving his reputation.”