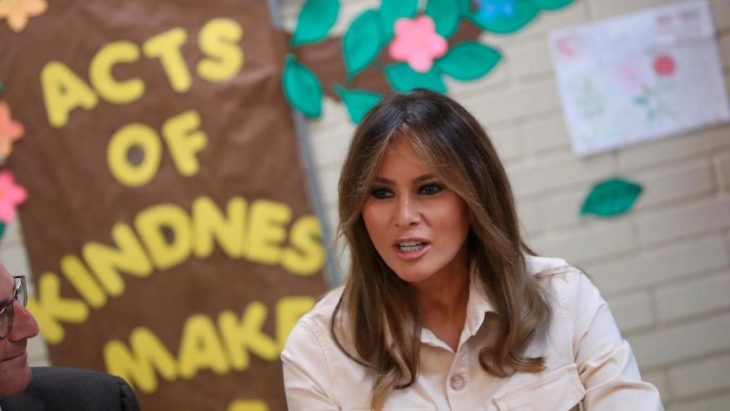 First lady Melania Trump makes a surprise visit to a social services center in Texas on in the wake of the crisis affecting immigrant families at the border.

First lady Melania Trump makes a surprise visit to a social services center in Texas on in the wake of the crisis affecting immigrant families at the border.

Melania Trump has arrived in Arizona for her second visit in recent days to the southern border region.

The first lady arrived Thursday in Tucson. She is expected to visit centers Thursday housing migrants apprehended at the U.S.-Mexico border.

The visit comes a week after Mrs. Trump traveled to the border town of McAllen, Texas, to meet with officials there dealing with detained families. She also met with children at one of the facilities.

But that trip was overshadowed by a jacket the first lady wore to and from Texas that said on the back: “I really don’t care, do u?”

The first lady’s spokeswoman said it was just a jacket, with no hidden message, but interest in her fashion choice was a distraction from Mrs. Trump’s trip. Her husband, President Donald Trump, undercut the no-message message by tweeting that his wife was saying she really doesn’t care about the “fake news” media.

This time, she’s not wearing any particular message.

The first lady boarded her plane wearing a black shirt and white slacks for the flight.

Mrs. Trump travels amid upheaval over her husband’s hard-line approach to immigration and evidence of increasing urgency over how that’s playing out.

A federal judge on Tuesday ordered that thousands of migrant children and parents be reunited within 30 days — and sooner if the youngster is under 5. The order poses logistical problems for the administration, and it was unclear how it would meet the deadline.