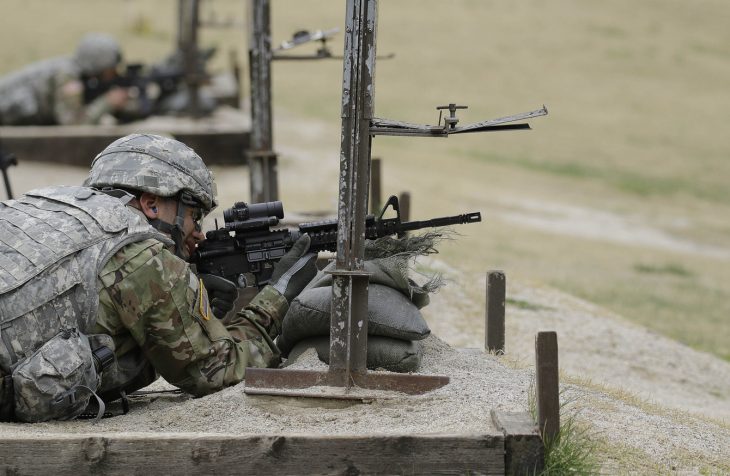 Trump on Tuesday had said the US would halt “war games” with its South Korean security ally.

The move, a significant break in how the US and South Korean militaries have worked together for decades, came even as Secretary of State Mike Pompeo warned that peace efforts still face risks, and insisted sanctions must be maintained until Pyongyang dismantles its nuclear arsenal.

“Major military exercises have been suspended indefinitely on the Korean peninsula,” a senior US official told AFP. Trump on Tuesday had said the US would halt “war games” with its South Korean security ally — but he did not make clear when the freeze would kick in.

US and South Korean forces have been training together for years, and routinely rehearse everything from beach landings to an invasion from the North, or even “decapitation” strikes targeting the North Korean regime.

Trump has sounded a triumphant tone since the Singapore summit, where he and Kim signed a joint statement in which Kim committed “to work toward complete denuclearisation of the Korean Peninsula.”

But critics have pointed to the vague wording of the non-binding document, which Trump described as a “deal,” and to concerns among allies about the decision to stop the US-South Korean “war games.”

Speaking on a regional tour to brief South Korean, Japanese and Chinese officials about the historic summit, Pompeo said Washington remains committed to the “complete, verifiable and irreversible” denuclearization of North Korea.

“We believe that Kim Jong Un understands the urgency… that we must do this quickly,” he said of the effort to have North Korea abandon its atomic arsenal.

In Beijing, Pompeo also said China “reaffirmed its commitment” to United Nations sanctions after the foreign ministry suggested earlier this week that the UN Security Council could consider easing the economic punishment against its ally.

“We truly believe that we have a path forward after so many years that can bring peace,” Pompeo told Chinese Foreign Minister Wang Yi before talks with President Xi Jinping.

But, he warned, “there are still risks that we won’t achieve” that goal, and more work needs to be done.

Any reduction in tensions on its doorstep is welcome for China, which accounts for around 90 percent of Pyongyang’s trade.

Speaking alongside Wang, Pompeo said the UN resolutions have mechanisms for sanctions relief “and we agreed that at the appropriate time that those would be considered,” stressing that any relief would come only after “full denuclearisation.”

Wang said China has a “firm commitment” to denuclearisation but that North Korea’s “legitimate” concerns must be addressed.

North Korean state media reported Wednesday that Trump had not only offered to stop military exercises during the dialog, but also to lift sanctions imposed on Pyongyang — causing concern in Tokyo and Seoul.