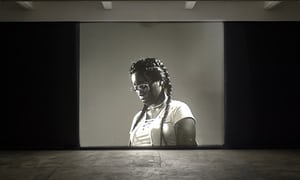 New Zealander awarded £30,000 for Autoportrait, a film installation about the partner of Philando Castile, who was shot dead by police in 2016

The 2018 Deutsche Börse photography prize has been awarded to the New Zealander Luke Willis Thompson for his film installation Autoportrait.

Its subject is Diamond Reynolds, a young black American woman who, in July 2016, broadcast live via Facebook the moments after her partner, Philando Castile, was shot dead by a police officer in St Anthony, Minnesota. The mobile phone footage and the subsequent court case, in which officer Jeronimo Yanez was acquitted of all charges, attracted worldwide publicity.

In a shortlist that included the combatively political series Monsanto: A Photographic Investigation by Mathieu Asselin, Thompson’s quietly transfixing installation was the favourite for the £30,000 prize, given the topicality of its subject matter and the way in which it unfolds as a self-consciously conceptual riposte to the media image of Diamond as a traumatised witness.

“Made in collaboration with its subject … it was conceived as a way to return agency to the protagonist,” said the chair of the judges, Brett Rogers, who is the director of the Photographers’ Gallery in central London. Thompson has also been nominated for the Turner prize for the same work.

As some purist critics of the prize may point out, Autoportrait is not a photograph. It comprises two four-minute takes of Reynolds, filmed in April 2017 in Minnesota, in which she is shot from below and appears utterly composed and reflective, whether in close-up or from a distance. She speaks, as if to herself, but we do not hear her words.

As it unfolds – in black-and-white Kodak film, in a darkened room to the noisy whirr of a large projector – it casts a photographic spell, requiring a degree of attentiveness to gesture and nuance and to the play of light and shadow on Reynolds’s face and arms.

In the breathing space it affords Reynolds, Autoportrait is a kind of silent, intimate counterpoint to the visceral force of her footage of the shooting and to the ways in which it gained a life of its own on social media.

Almost motionless, she emerges as a cinematic presence in a manner intentionally redolent of Andy Warhol’s similarly mysterious and mesmerising series of Screen Tests. “She is recognised for the worst day of her life,” Thompson told the Guardian last year. “Diamond needed to be interpolated into cinematic history – the history of cinema owes black life something.”

Rogers said the judging process was “lengthy and complex”, focusing on “the role and form of photography today, its almost unrivalled power as a social, political and creative force and its unique ability to bring to public focus some of the most urgent and relevant issues of today”.

Autoportrait has provoked strong criticism. “What will not go away is the sense that this is yet another artwork in which black trauma functions as ready-to-wear cultural clothing,” wrote the artist and writer Nick Scammell on the photography website ASX. “Reynolds is known because she refused to be silenced. Yet Autoportrait sees her both speechless and distanced into black and white film … Detached. Disconnected. Inert.

“We must also ask, if this work is truly a collaboration, as it is repeatedly described as being, why is Reynolds not a co-nominee with Thompson?”