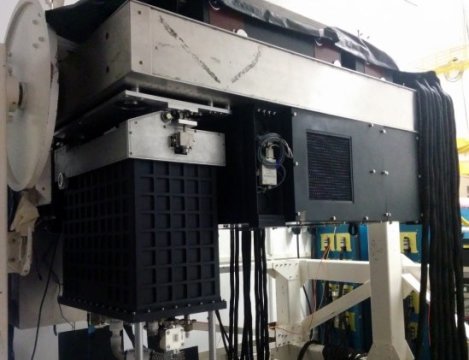 An international team of scientists has developed a new instrument to detect planets around the nearest stars. It is the world’s largest and most advanced superconducting camera.

Somewhere in the vastness of the universe another habitable planet likely exists. And it may not be that far — astronomically speaking — from our own solar system.

Distinguishing that planet’s light from its star, however, can be problematic. But an international team led by UC Santa Barbara physicist Benjamin Mazin has developed a new instrument to detect planets around the nearest stars. It is the world’s largest and most advanced superconducting camera. The team’s work appears in the journal Publications of the Astronomical Society of the Pacific.

The group, which includes Dimitri Mawet of the California Institute of Technology and Eugene Serabyn of the Jet Propulsion Laboratory in Pasadena, California, created a device named DARKNESS (the DARK-speckle Near-infrared Energy-resolved Superconducting Spectrophotometer), the first 10,000-pixel integral field spectrograph designed to overcome the limitations of traditional semiconductor detectors. It employs Microwave Kinetic Inductance Detectors that, in conjunction with a large telescope and an adaptive optics system, enable direct imaging of planets around nearby stars.

“Taking a picture of an exoplanet is extremely challenging because the star is much brighter than the planet, and the planet is very close to the star,” said Mazin, who holds the Worster Chair in Experimental Physics at UCSB.

Funded by the National Science Foundation, DARKNESS is an attempt to overcome some of the technical barriers to detecting planets. It can take the equivalent of thousands of frames per second without any read noise or dark current, which are among the primary sources of error in other instruments. It also has the ability to determine the wavelength and arrival time of every photon. This time domain information is important for distinguishing a planet from scattered or refracted light called speckles.

“This technology will lower the contrast floor so that we can detect fainter planets,” Mazin explained. “We hope to approach the photon noise limit, which will give us contrast ratios close to 10-8, allowing us to see planets 100 million times fainter than the star. At those contrast levels, we can see some planets in reflected light, which opens up a whole new domain of planets to explore. The really exciting thing is that this is a technology pathfinder for the next generation of telescopes.”

Designed for the 200-inch Hale telescope at the Palomar Observatory near San Diego, California, DARKNESS acts as both the science camera and a focal-plane wave-front sensor, quickly measuring the light and then sending a signal back to a rubber mirror that can form into a new shape 2,000 times a second. This process cleans up the atmospheric distortion that causes stars to twinkle by suppressing the starlight and enabling higher contrast ratios between the star and the planet.

During the past year and a half, the team has employed DARKNESS on four runs at Palomar to work out bugs. The researchers will return in May to take more data on certain planets and to demonstrate their progress in improving the contrast ratio.

“Our hope is that one day we will be able to build an instrument for the Thirty Meter Telescope planned for Mauna Kea on the island of Hawaii or La Palma,” Mazin said. “With that, we’ll be able to take pictures of planets in the habitable zones of nearby low mass stars and look for life in their atmospheres. That’s the long-term goal and this is an important step toward that.”

Materials provided by University of California – Santa Barbara. Original written by Julie Cohen. Note: Content may be edited for style and length.