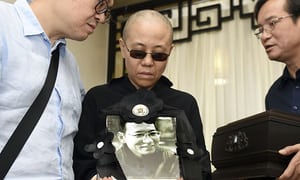 Liu, who has never been charged with a crime, has been under house arrest in China since her late husband Liu Xiaobo won the Nobel peace prize in 2010

Paul Auster, JM Coetzee, Alice Sebold and Khaled Hosseini are among dozens of major writers issuing an urgent call for the Chinese poet and artist Liu Xia to be freed after almost a decade under house arrest.

Liu, 50, has been under house arrest in China since her late husband, the human rights activist Liu Xiaobo, was given the Nobel peace prize in 2010. Chinese authorities insist Liu “enjoys all freedoms in accordance with the law”, but supporters say her movements have been severely restricted and she lives under constant surveillance.

Liu Xiaobo, who championed non-violent resistance as a way of overcoming “forceful tyranny” in China, died of liver cancer in 2017 at the age of 61 after spending almost a quarter of his life in prison.

Last month, in a phone conversation with her friend the exiled writer Liao Yiwu, Liu said she herself was ready to die. “If I can’t leave, I’ll die in my home. Xiaobo is gone, and there’s nothing in the world for me now. It’s easier to die than live. Using death to defy could not be any simpler for me … If I’m dead, it’ll all be done with.” Liao posted a recording of the conversation online, on which Liu is heard crying for minutes at a time.

Activists have repeatedly called for the release of Liu, who has never been accused or convicted of any crime. Now, big-name writers including Auster, Nobel laureate Coetzee, The Lovely Bones author Sebold, The Kite Runner author Hosseini, author Michael Chabon, Pulitzer-winning poet Rita Dove and the Chinese author Hu Ping have issued a public display of solidarity with the imprisoned writer.

Reading excerpts from Liu’s poetry in a video made for Amnesty International, the authors are calling for the lifting of all restrictions on her movements. “Artists who are free to speak must do so on behalf of other artists whose voices are being stifled,” said Hosseini.

PEN America’s chief executive Suzanne Nossel said the Chinese government’s claim that Liu “enjoys all freedoms in accordance with the law” was hollow.

“As efforts to allow [her] to travel abroad for medical treatment stall, literary and human rights communities renew and amplify their call to release a poet who has been accused of no crime,” said Nossel. “We are proud to stand with Liu Xia’s literary peers to celebrate her work and challenge the Chinese government’s relentless campaign to erase her voice.”

Amnesty International’s East Asia campaigns director Lisa Tassi called the Chinese government’s “efforts to silence” Liu “despicably cruel … Liu Xia’s poetry inspires so many who are now united in calling for her to be free.”