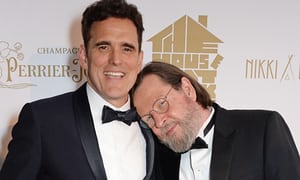 Director addresses storm over The House That Jack Built and his Cannes return, saying if he ever kills anyone it will be a journalist

Lars von Trier has broken his silence on the reception to his latest film, The House That Jack Built, which premiered at the Cannes film festival on Monday to widespread outrage, a mass walkout and tepid reviews.

The drama stars Matt Dillon as a prolific serial killer who slaughters women and children and, in a flashback that has perhaps caused the most consternation, cuts the foot off a duckling. In an interview with Cineuropa, the Danish director said he was pleased by the reaction and it made him “very relaxed”.

“It’s quite important not to be loved by everybody, because then you’ve failed. I’m not sure if they hated it enough, though. If it gets too popular, I’ll have a problem. But the reception seemed just about right, I think.”

Asked about his research for the film, Von Trier said he had read a lot of Patricia Highsmith and that it was “a pleasure to write”. While his knowledge of serial killers was sketchy, he added, “I do know a bit about psychopaths. I’ve never killed anyone myself. If I do, it will probably be a journalist.”

The premiere marked the return of the director to the festival that made him famous, having been declared “persona non grata” in 2011 after making a joke declaring kinship with Hitler in the press conference about his film Melancholia.

Von Trier paid tribute to the festival director, Thierry Frémaux, whom he said had been “working very hard for me … for some reason, it was difficult to remove the persona non grata thing”. The out-of-competition slot for The House That Jack Built was, he believed, “a little piece of remaining punishment”.

Reflecting on his time away from Cannes – 2014’s Nymphomaniac premiered at the Berlin film festival, where Von Trier did not attend the press conference – he said he had become “more humble” over the past seven years, in part because of his treatment for alcohol addiction. He added that the high anxiety of his return to the film festival meant that his temperance was on pause.

“At Cannes it’s impossible not to drink, so I’m taking a little holiday from the programme at the moment. I don’t take Antabus, because if I get a really big anxiety attack the only thing that works is alcohol.”