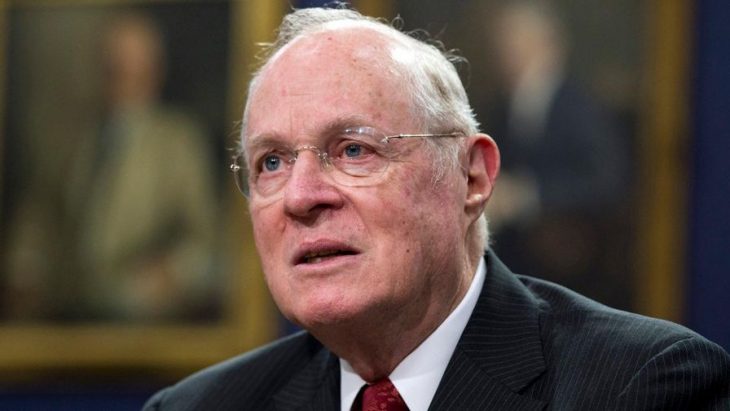 The 81-year-old Kennedy said he is stepping down after more than 30 years on the Supreme Court.

The 81-year-old Kennedy said he is stepping down after more than 30 years on the Supreme Court.

Longtime Supreme Court Justice Anthony Kennedy announced his retirement Wednesday. Here’s a look back at his key opinions during his more than 30 years served on the nation’s highest court.

FREE SPEECH – Can a group identifying itself as a religious organization pass out literature on its faith at a public place like an airport?

“The First Amendment is often inconvenient. But that is beside the point. Inconvenience does not absolve the government of its obligation to tolerate speech.”

ABORTION RIGHTS – State restrictions on access to the procedure.

“At the heart of liberty is the right to define one’s own concept of existence, of meaning, of the universe, and of the mystery of human life.”

“People have organized intimate relationships and made choices that define their views of themselves and their places in society, in reliance on the availability of abortion in the event that contraception should fail…. We conclude the line should be drawn at viability, so that, before that time, the woman has a right to choose to terminate her pregnancy.”

“The Supreme Court of Florida has said that the legislature intended the State’s electors to ‘participat[e] fully in the federal electoral process,’ as provided in 3 U. S. C. §5. That statute, in turn, requires that any controversy or contest that is designed to lead to a conclusive selection of electors be completed by December 12. That date is upon us, and there is no recount procedure in place under the State Supreme Court’s order that comports with minimal constitutional standards. Because it is evident that any recount seeking to meet the December 12 date will be unconstitutional for the reasons we have discussed, we reverse the judgment of the Supreme Court of Florida ordering a recount to proceed. Seven Justices of the Court agree that there are constitutional problems with the recount ordered by the Florida Supreme Court that demand a remedy.”

— Bush v. Gore (2000). Although the controlling majority opinion was unsigned sources have told Fox News it was largely written behind the scenes by Kennedy and Justice Sandra Day O’Connor.

“Liberty protects the person from unwarranted government intrusions into a dwelling or other private places. In our tradition the State is not omnipresent in the home. And there are other spheres of our lives and existence, outside the home, where the State should not be a dominant presence. Freedom extends beyond spatial bounds. Liberty presumes an autonomy of self that includes freedom of thought, belief, expression, and certain intimate conduct. The instant case involves liberty of the person both in its spatial and more transcendent dimensions.”

“As the Constitution endures, persons in every generation can invoke its principles in their own search for greater freedom.”

CAPITAL PUNISHMENT – Death penalty for aggravated murder committed by those under age 18.

“When a juvenile offender commits a heinous crime, the State can exact forfeiture of some of the most basic liberties, but the State cannot extinguish his life and his potential to attain a mature understanding of his own humanity.”

“It is proper that we acknowledge the overwhelming weight of international opinion against the juvenile death penalty.”

CAMPAIGN FINANCE REFORM – Congressional law restricting corporations and unions from supporting individual candidates through independent expenditures. The court said political speech is a protected to a large extent by the First Amendment.

“This Court now concludes that independent [political] expenditures, including those made by corporations, do not give rise to corruption or the appearance of corruption.”

“Speech is an essential mechanism of democracy, for it is the means to hold officials accountable to the people. The right of citizens to inquire, to hear, to speak, and to use information to reach consensus is a precondition to enlightened self-government and a necessary means to protect it. By taking the right to speak from some and giving it to others, the Government deprives the disadvantaged person or class of the right to use speech to strive to establish worth, standing, and respect for the speaker’s voice. The Government may not by these means deprive the public of the right and privilege to determine for itself what speech and speakers are worthy of consideration. The First Amendment protects speech and speaker, and the ideas that flow from each.”

“When Government seeks to use its full power, including the criminal law, to command where a person may get his or her information or what distrusted source he or she may not hear, it uses censorship to control thought. This is unlawful. The First Amendment confirms the freedom to think for ourselves.”

FREE SPEECH – A public official who falsely claimed to have been awarded the Medal of Honor challenged his prosecution under a federal law making it a crime to lie about receiving military decorations.

“The remedy for speech that is false is speech that is true. This is the ordinary course in a free society. The response to the unreasoned is the rational; to the uninformed, the enlightened; to the straight-out lie, the simple truth.”

“The right to marry is a fundamental right inherent in the liberty of the person, and under the Due Process and Equal Protection Clauses of the Fourteenth Amendment couples of the same-sex may not be deprived of that right and that liberty. The Court now holds that same-sex couples may exercise the fundamental right to marry. No longer may this liberty be denied to them.”

“Dignitary wounds cannot always be healed with the stroke of a pen.”

“No union is more profound than marriage, for it embodies the highest ideals of love, fidelity, devotion, sacrifice, and family. In forming a marital union, two people become something greater than once they were. As some of the petitioners in these cases demonstrate, marriage embodies a love that may endure even past death. It would misunderstand these men and women to say they disrespect the idea of marriage. Their plea is that they do respect it, respect it so deeply that they seek to find its fulfillment for themselves. Their hope is not to be condemned to live in loneliness, excluded from one of civilization’s oldest institutions. They ask for equal dignity in the eyes of the law. The Constitution grants them that right.”

AFFIRMATIVE ACTION – Challenge to state law banning use of racial criteria as part of the overall admissions process by state universities.

“Our constitutional system embraces, too, the right of citizens to debate so they can learn and decide and then, through the political process, act in concert to try to shape the course of their own times and the course of a nation that must strive always to make freedom ever greater and more secure. Here Michigan voters acted in concert and statewide to seek consensus and adopt a policy on a difficult subject against a historical background of race in America that has been a source of tragedy and persisting injustice. That history demands that we continue to learn, to listen, and to remain open to new approaches if we are to aspire always to a constitutional order in which all persons are treated with fairness and equal dignity. Were the Court to rule that the question addressed by Michigan voters is too sensitive or complex to be within the grasp of the electorate; or that the policies at issue remain too delicate to be resolved save by university officials or faculties, acting at some remove from immediate public scrutiny and control; or that these matters are so arcane that the electorate’s power must be limited because the people cannot prudently exercise that power even after a full debate, that holding would be an unprecedented restriction on the exercise of a fundamental right held not just by one person but by all in common. It is the right to speak and debate and learn and then, as a matter of political will, to act through a lawful electoral process.”