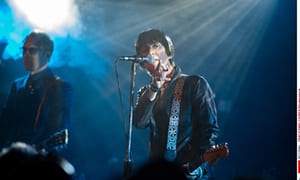 ‘This song is about the rise of the right wing,” Johnny Marr says ahead of Bug, his third solo album’s most overt political swipe. A pause for a mischievous sneer. “Or so I’ve read.”

Marr must never tire of reminding interviewers, every time his erstwhile colleague Morrissey opens his once-loving mouth, that it’s been 30 years since they were in a band together. But history binds the pair, though they are about as likely to do a reunion tour as Yanny and Laurel or Cain and Abel. Even today their careers are unintentionally symbiotic, with Moz using official online statements to promote far-right party For Britain on account of their accidental animal rights policies (being anti-Islam means being anti-halal, which is Morrissey catnip). Marr is now the guilt-free Smiths experience.

He’d never acknowledge it, but he plays up to the billing with panache. Striding on stage at this low-key showcase for new album Call the Comet in a shiny bomber jacket and the perfectly imperfect bed-hair of Manchester rock royalty, within two songs he’s into Bigmouth Strikes Again as if out to rescue his heritage from the political plughole. His gruffer, but by no means unrefined, vocals lend fresh flavour to the Smiths tracks he drops intermittently into the set; his fired-up Bigmouth, stabbed through with trademark arpeggios, seems designed to remind us that the Smiths were as much gobby post-punk rabble as they were foppish ego cult, while The Headmaster Ritual could be Daytripper-era Beatles with switchblades up their blazer sleeves.

He doesn’t shy from the challenge either, tackling quintessentially Moz showstoppers such as Last Night I Dreamt That Somebody Loved Me; Please, Please, Please Let Me Get What I Want; and There Is a Light That Never Goes Out, alongside How Soon Is Now?, in which the guitar is decidedly the star. Unafraid to emulate Morrissey’s idiosyncratic vocal pirouettes, Marr contests custody of the songs magnificently, owning them every bit as much as his former frontman and proving that Stephen’s poet-next-door charisma was only ever a fraction of the Smiths’ formidable art.

Such delightful fan fodder, plus a breezy run through Electronic’s Getting Away With It, sugars a set dominated by Call the Comet, showcased almost in full tonight. Moz-bait or no, it’s set in a near future in which a race of artificially intelligent aliens called the Tracers have arrived to save humanity from its populist folly, advanced technology correcting the ills of its mewling social media infant. Sonically, though, it’s lodged firmly in the past. Motorik and doom-laden mood pieces such as Actor Attractor and New Dominions recall Joy Division, Can and Depeche Mode, and even flirt with goth on occasion.

It’s stirring stuff, but after decades as a guitar legend for hire in bands such as Modest Mouse and the Cribs, Marr seems to be floundering for a distinct solo sound. He fares best when letting his old one fly, indulging his virtuoso proto-indie guitar flourishes on Hi Hello, a song with all the springtime swing of There Is a Light, and a highlight of a night that finds Marr elevated to a symbol of alt-rock righteousness almost by proxy. One thing’s for sure though – if the Smiths ever do reform they’ll need David Dimbleby as tour manager.