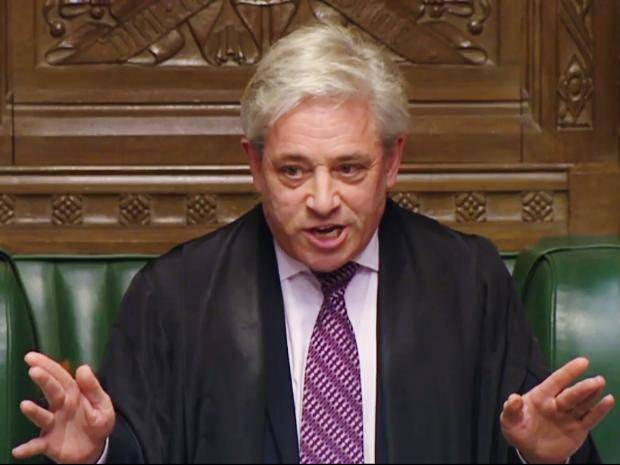 A probe into allegations John Bercow bullied members of staff has been blocked by MPs.

Andrew Bridgen, a Conservative MP, asked the parliamentary commissioner for standards, Kathryn Stone, to investigate whether Mr Bercow had broken the MPs’ code of conduct.

Ms Stone sought the opinion of the standards committee – made up of MPs and lay members from outside Parliament – on whether an investigation fell within her remit.

The five MPs who voted all agreed she was entitled to investigate a claim under the Code of Conduct – which calls for MPs to “conduct themselves in a manner” which will strengthen trust in Parliament and avoid bringing it into disrepute.

But the guide to the rules says the standards committee can authorise inquiries dating back more than seven years “only in exceptional circumstances”.

The voting MPs on the committee split three-two to reject the investigation, with Labour’s Bridget Phillipson and Tory Gary Streeter backing the probe and Tories Sir Christopher Chope and John Stevenson and Labour’s Kate Green refusing to authorise Ms Stone to conduct the investigation.

The committee’s Labour chairman, Sir Kevin Barron – whose casting vote is only used in the event of a tie – said: “Accordingly the commissioner has not been authorised to carry out an inquiry into this matter.”

He stressed that under the current rules, lay members of the committee did not have voting rights but it was his “personal view” they should.

Tory MP Mr Bridgen condemned the decision, telling the Press Association it was an “unprecedented” move.

“Not only am I not happy, I think the job of standards is to protect and enhance the reputation of MPs and Parliament and this decision will further diminish our standing in the eyes of the public,” he said.

“What you have got is MPs protecting an MP – the Speaker – from an investigation.”

He added: “This decision will not remove the accusations that hang over the Speaker.”

Mr Sinclair was private secretary to Mr Bercow’s predecessor Michael Martin, and retained the position when the new Speaker took over in 2009.

He told BBC’s Newsnight that Mr Bercow undermined him in front of other staff, shouted, swore and attempted to physically intimidate him.

The Speaker was prone to “over-the-top anger”, he claimed, adding: “I’m not sure he was completely in control of it.”

On one occasion Mr Bercow was “absolutely furious about something” and “there was a lot of bad language and suddenly his mobile phone which he’d been holding was flung on the desk in front of me and broke into a lot of bits”.

Following the 2010 general election, he said the Speaker told him he was no longer needed.

Newsnight claimed she was undermined by Mr Bercow and he appeared to frequently shout at her and she was subsequently diagnosed with post-traumatic stress disorder.

A spokesman for Mr Bercow has said there is “no substance” to the allegations.