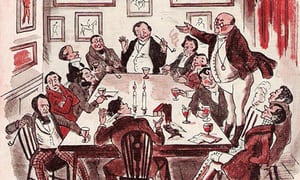 Pork-based insults have a long history, but should pink-faced politicians really be offended?

This week’s lexical meat-fest was gammongate, or perhaps Armagammon: a row about whether calling people “gammon” was racist or just stupid. For certain leftwingers, “gammon” is a contemptuous label for middle-aged white men with pink faces and (presumably) less than purely Momentum-esque political views.

Pork-based insults are of course very old. “Gammon-faced” is an insult from 1604, and no actor likes to be called a ham. In 18th-century thieves’ cant, a “gammon” was an accomplice who distracted the victim’s attention. And “gammon” could also mean nonsensical talk or ideas – it is used by Dickens in The Pickwick Papers, but had existed for decades. In John Liddiard Nicholas’s 1817 travelogue, Narrative of a Voyage to New Zealand, our doughty explorer, visiting Maori chiefs, decides that their customs are “all gammon”: they retort, not unreasonably, that the preaching of his missionary friend is “gammon” too.

Two hundred years ago, Nicholas explains, to say that something was “gammon”, or nonsense, was “the language of vulgar ridicule”. Not much progress is to be expected, perhaps, in the evolution of political abuse.