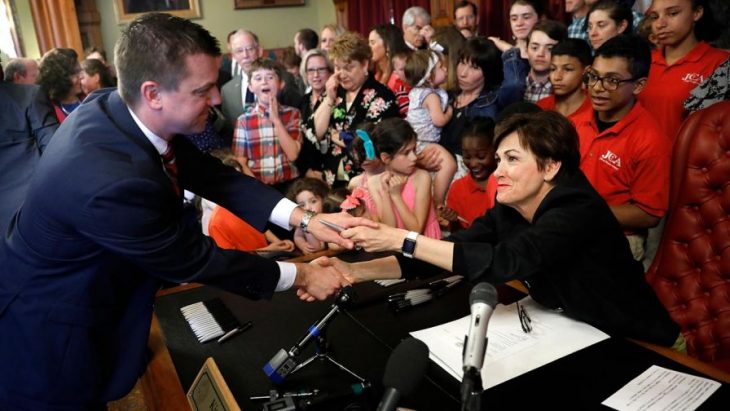 Iowa’s Supreme Court on Friday blocked the state’s mandatory 72-hour waiting period before a woman can undergo an abortion.

“We conclude the statute enacted by our legislature, while intended as a reasonable regulation, violates both the due process and equal protection clauses of the Iowa Constitution because its restrictions on women are not narrowly tailored to serve a compelling interest of the state,” Chief Justice Mark Cady wrote in the ruling.

Then-GOP Gov. Terry Branstad signed the law last year, and various groups, including the ACLU, subsequently sued to block its enforcement. Iowa’s statute was one of the most restrictive abortion access laws in the nation.

Iowa Solicitor General Jeffrey Thompson, who defended the law for the state, argued that protecting unborn life is a state interest of the highest order. He said choosing to terminate a pregnancy is not a fundamental right under the Iowa Constitution, and that the waiting period provides time for women to consider information about the procedure that abortion providers are required to provide, including an opportunity to view an ultrasound or hear a fetal heartbeat.

Planned Parenthood argued that the court “should join the high courts in numerous other states that have found that the right to choose abortion warrants greater protection than has been afforded under the federal Constitution.” The organization said supreme courts in 12 states had made such rulings.

A separate Iowa law is also being challenged, which would bar abortions when a fetal heartbeat is detected, usually at about six weeks of pregnancy. That law is on hold pending legal challenges to its constitutionality.