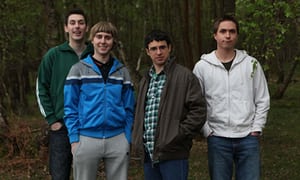 Have to agree with Inbetweeners. Rarely has what it’s like to be a teenage boy been so wonderfully caricatured. There are moments watching it where I have had tears running down my face watching as the memories of what I was like aged 15 came flooding back. The nonsense, the bravado: wonderful stuff. Cambridgeskip

My overriding memory of being a teenager is that I spent most of my life “having a laugh” and being generally daft with my mates. That’s why to my mind this is the only show to have anywhere near accurately captured what it’s like to be a teen growing up in the UK. Brighty76

I love Fresh Meat. I wish more teenagers would watch it before going to university (I work in one) as I think it nails the reality of university for a lot of students. I see a lot who sit back and expect this amazing experience to just magically happen to them, but Fresh Meat shows a group who are thrown together in circumstances that none of them chose and yet they crack on and make the best of it.
harriethedgehog

This was a short lived US series about a computer geek and his buddies solving crimes using the internet, before it really even came into being. The second it opened, with its switched on Mozart theme and image of a slowly rotating low res tetrahedron behind a fish tank, I was hooked. It got me into computing. Grange Hill was the gold standard back then, but I don’t remember it actually inspiring me to do anything except try and source some heroin [/joke]. Rambo R

Buffy still holds up incredibly well, even today when it’s very rooted in the 90s. Just great TV that also grew with its viewership – it wasn’t just a teen dramedy monster mash, it had massive themes about responsibility, growing up and trying to fit in in the world, the truth that sometimes even your friends and role models can disappoint you, and never giving up. It may well be that these themes have been tackled before in other shows, but Buffy brought them together and rammed a stake through the heart of some of them! HBrint

Granted, it was primarily a hallucinatory, surreal pastiche of US daytime soaps, but the teenagers were central to the Twin Peaks world (in its original incarnation), and it conveyed the darkly confusing teen-transition to the adult world, in David Lynch’s inimitable style. YeOldeMerryPrankster

Johnny Jarvis, starring the late Mark Farmer (who also played Gary Hargreaves in Grange Hill), was the best depiction ever of my generation growing up as teenagers in Thatcher’s Britain. The destruction of the law abiding working class and the creation of an underclass is in its infancy in this series. It is set in east London, but could be anywhere during that torrid time. Elephant63

Its brevity [the show was cancelled after one season] captures the fleeting teenage years better than a lot of other shows that plod on and on. And its insight into the 90s teenager’s life was pretty spot on. There isn’t really a “perfect” teen show, but there are great shows like this that speak to teenagers in a specific time and a place. lovebrigade

Despite not being being an “issues” show, it made the two leading characters in what was effectively an action science fiction being girls seems completely natural. Something that works get a show branded “social justice warrior propaganda” these days. Tell me it wasn’t as right on as I remember, but it was shows like this when I was a kid that made me want to only hang out with girls. Sudders

I can’t believe Skins is not included [in the list of Guardian writers’ picks]: it was well written, fabulously acted, tackled some major issues, reinvented itself with new characters regularly and surely produced some of the best and brightest young British actors including two Oscar nominations. (Daniel Kaluuya, Dev Patel, Jack O’Connell, Nicholas Holt, Kay Scodelario, Hannah Murray, Joe Dempsie to name some of the most prominent).
H_Heidi

Niche perhaps, but BBC Scotland’s 1981 teen mini-soap Maggie just tugged at the heartstrings of every teenager – boy or girl – coming to terms with school, relationships and parents. Kirsty Miller shone in the title role, heart-stoppingly vulnerable and feistily determined in the same scene. ThirdWibbler

I’ve watched a lot of excellent TV since it was first on, but Press Gang is still in with a good shout to be the best TV show ever. A true masterpiece, and proves the point that [Steven] Moffat writes brilliantly for kids, and very well for adults, but generally messes up when aiming for both.