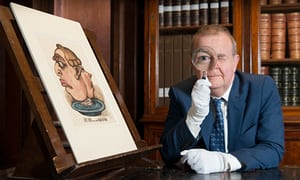 At the time it was somewhat embarrassing but 13 years after Banksy installed a hoax exhibit at the British Museum curators are finally seeing the funny side.

The museum has announced it has approached the artist to lend a piece formally known as Peckham Rock – a small “cave painting” of a stone-age hunter pushing a supermarket trolley. The artwork was left in the museum by Banksy, along with a convincing panel of text which earnestly explained it was from the “Post-Catatonic era”. It went unnoticed by staff for at least a day, possibly a lot longer.

The rock will be part of an autumn exhibition for which Ian Hislop has gone through the British Museum’s vast collection to choose more than 100 objects which have stories of dissent, subversion or satire.

Hislop, the editor of Private Eye and described by the British Museum’s chairman Sir Richard Lambert as “the nation’s raspberry blower-in-chief”, said it had been enormous fun.

“We are very sneery about the past, we are very condescending about other cultures and other times and imagine that only we are brave enough, bright enough or sensible enough to notice there is something wrong with the way we’re governed,” he said. “The great thing about this exhibition is to show that people have always noticed.”

The display of the Banksy piece “proves that the British Museum can take a joke”, said Hislop, although it was not viewed as being all that funny by everyone concerned at the time.

There were questions of whether the artwork should enter the collection but tricky paperwork and the rock’s sniffily official designation as “lost property” meant it did not happen.

Tom Hockenhull, the British Museum curator who is working on the show with Hislop, said: “It was the cause of considerable embarrassment for the museum at the time and when Banksy asked for it back we were only too pleased to oblige.”

Hislop said it took him about 30 seconds to say yes when the former director Neil MacGregor came up with the idea for the show.

One of his favourite objects in the show will be a brick from the ancient Babylonian reign of Nebuchadnezzar. All bricks had to bear the king’s name but, amazingly, the brickmaker has written his own name over the king’s before it was put in a wall.

There will be objects that fall into the “hiding in plain sight” category, such as a the 16th-century Stonyhurst Salt, a salt cellar which, with the beads of Christ’s blood and crosses, was clearly a Catholic sacramental object. But they were banned, so it was a salt cellar.

From the museum’s 12,000 or so satirical prints will be a particularly vicious one by James Gillray from 1792 of the Prince of Wales: morbidly obese, picking his teeth with a fork, and surrounded by medication for venereal disease.

“I don’t think anyone has ever been as rude about anyone as they were about the Prince Regent,” said Hislop wistfully.

Other objects will include an Edwardian coin with the king’s head defaced with the slogan “Votes for Women”; a woven raffia cloth from the Democratic Republic of Congo which subverts the image of a leaping leopard, the symbol of Zaire’s dictator Mobutu Sese Seko; and a pink knitted pussy hat worn at the January 2017 women’s march against Donald Trump.

There will also be plenty of filth, Hislop promised, including a first-century oil lamp of Cleopatra having sex with a crocodile.

Hislop said the exhibition would tell the stories of people risking their lives as well as people risking nothing at all. “It is an extraordinary demonstration of spirit from thousands of years ago until now.”

• I Object: Ian Hislop’s search for dissent is at the British Museum, London, from 6 September to 20 January 2019