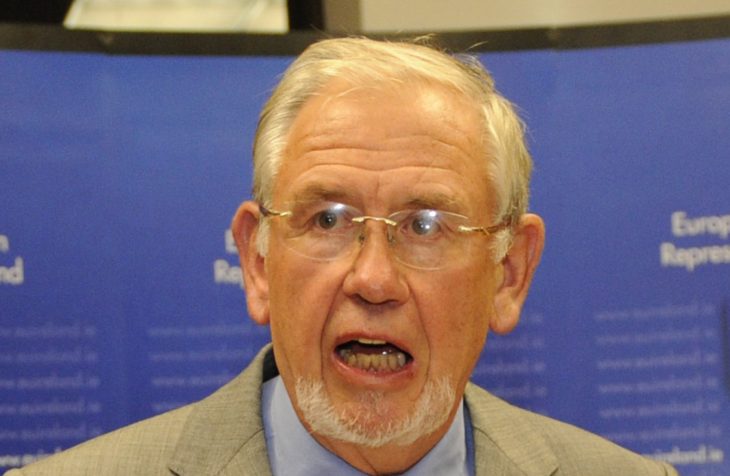 Two Social Democrats TDs have pulled out of the festival in the wake of criticism of the event’s gender balance. We spoke to its founder, Joe Mulholland.

THE FOUNDER AND organiser of the MacGill Summer School said that he “tried my best” to achieve balance in this year’s line-up as two TDs threatened pulling out over the lack of gender parity.

Social Democrats co-leaders Catherine Murphy and Róisín Shortall have said they will withdraw from their respective panels at this year’s MacGill Summer School unless significant changes are made to the gender-balance of panels across all sessions. The event has been criticised this week for having about 20% female representation in its panel events.

Deputies Murphy and Shortall said they had accepted a place on panels but that they had not been aware that the programme for other sessions was predominantly male. Both leaders said they were surprised by Mulholland’s claim in an interview that it was hard to find people with the “right aptitude”.

Catherine Murphy said: “I find the comment from the organisers about it being ‘difficult to find people with the right aptitude’ quite offensive when the implication is obviously that that is the reason more women are not invited to speak at the event. That is simply not true or else the organisers have conducted a very limited search.”

Joe Mulholland, who organises the MacGill Summer School – which was founded in Glenties, Donegal, in 1981 – told TheJournal.ie that both Shortall and Murphy had been in touch with him about potentially pulling out.

“These are two women for whom I have the greatest respect and I will listen to them obviously as I will to any woman. Over the years I have tried my best to promote women when I had that capacity and to defend women, so I have huge respect for women in every walk of life,” he said.

The theme of this year’s MacGill event is ‘the future of Ireland in a new Europe’. Female speakers include journalists Dearbhail McDonald and Ingrid Miley, Mairead McGuinness MEP, and Vicky Phelan.

The event describes itself as being “consistently… a source of innovative and fresh thinking on a range of social, economic and political ideas”.

When questioned on the gender balance criticism, Mulholland said that this year he has “tried my best – obviously my best is not good enough and obviously it’s time when I have to think about what I’m doing with this”.

Mulholland said that initially he “thought I had done well, all things considered”.

“I am going to think very carefully but I am going to listen to people,” said Mulholland following the criticism, pointing out that the summer school has a small unpaid staff and few resources considering its size.

“Unfortunately as it has grown over the years [the panels are] resting on my shoulders and that is my mistake and my fault,” he said.

Asked if he plans to add more women to the bill, Mulholland said that at this stage the panels are complete, but “there’s no time in thinking of how difficult it is”.

“It’s my mistake and it has to be refectified and the only way of rectifying it is to see which areas one can add women to the panel.”

“I’m sitting here on my own at a laptop and have nobody [to help here],” he said, adding that he planned to consult with friends and advisers to try and remedy the situation.

Mulholland said he is “delighted” with the social changes in Ireland that mean that there is now over 20% female representation in the Dáil.

“Mind you as we keep preaching at MacGill, it has a long way to go to really change because we are talking about dysfunction at this year’s school, talking about the lack of accountability, lack of governance- which all goes back to our political system. A lot needs to change – the political system itself hasn’t made huge strides in the equality of women,” he said.

This will most likely be Mulholland’s final year running MacGill, and asked if he thinks that the festival needs to reassess its focus for the future he said:

I realise the school now needs to maybe go in a different way if it needs to continue. We’ve never been resourced and so on. I had more or less decided that this would be my last due to health problems and such things and that it was time really to pass it on – obviously that is becoming clear.

This would be a rather sad way to go out but sometimes you don’t determine everything in life, other things intervene, but anyway look. I have to now get down to work, consult with the few people I know. One of my difficulties is I am a bit out of public life now and therefore haven’t the same level of contacts I would have in the past.

In an interview with the Irish Times published today, Mulholland was quoted as saying  “at times it is difficult to find the person with the correct aptitude for some of the topics that are discussed in sessions”.

“That was a mistake,” he said of using the word ‘difficult’. “That was a word I shouldn’t have used. Of course I know there are hugely talented women in all sorts of areas, science, technology and so on, which is great. In some areas it might be more difficult than others. So I don’t know, we are very much into the socioeconomic political areas whether women have really… Of course I invited very able women this year as well who have reached the top of the profession but they weren’t available.”

He said that what you see in the programme now is “only a fraction” of who he invited to take part in the panel discussions.

The MacGill Summer School has been criticised for appealing to a certain type of audience, one that is somewhat reflected in the makeup of its speakers.

“I know it has been criticised for an older audience, which isn’t quite true – there is a fair mix and an increasing number of audiences, [they] have been increasing steadily which shows MacGill has been doing something right,” said Mulholland.

But he said: “We need more young people. The problem is that in July, towards that time a lot of young people are abroad working and so on.”

He said that “there’s always things you could do better”.

“I draw up the programme. I have a few good friends in public life and would meet them and seek advice. This never hit anybody, the gender balance. Last year, there’s no real policy, we had a session with three women out of four. It was a session on health.”

He said that summer school is not “anti-women”.

“The fact of the matter is there is one woman on every panel. Maybe with the exception of one or two, but obviously people expect more in this day and age, they expect equality. But if you look at other areas in public life and conferences that I go to and so on that is not the case [that there is full equality of speakers].”

Mulholland said that he is cognisant of the need for women to be represented in public life.

“As those who are close to me know, I start every conversation with ‘look, let’s think of women’, so yeah, I suppose we could have with more effort but it’s more effort and it’s more time [considering our resources].” Now, he intends in putting time into looking at what he can do to address the issue.

Additionally, Mulholland said that he was concerned about the impact of any controversy on Glenties, where the summer school takes place. “There are a lot of people who depend on MacGill in Donegal. That community depends on it and I would hate that they would suffer in any way from this financially.”

Deputy Catherine Murphy said in her statement today that “there is an abundance of articulate and well-informed women that could have been approached to participate and weren’t”.

“I cannot in good conscience take part in an event that has so blatantly disregarded the importance of equal female participation and for that reason I will withdraw from the session I was due to speak at unless significant changes are made across the programme,” she said.

Deputy Róisín Shortall said that Irish politics “has come a long way from the male pale and stale boys club that it traditionally was”.

High-profile events like MacGill have a responsibility to reflect that change but also to recognise the wealth of fantastic and informed female voices across the Irish public life.