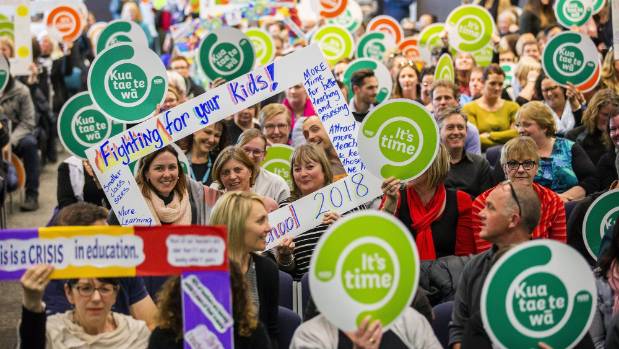 Primary school teacher strikes are now a real possibility, judging by the mood of Manawatū educators at a special union meeting called to vote on the latest pay offer.

Teachers and principals across the country have been meeting this month about whether to accept the Ministry of Education’s pay offer and a vocal throng of Manawatū teachers turned out for the vote at Awapuni Racecourse on Thursday.

They also voted about whether to hold a half-day work stoppage meeting in August.

Teachers asked for a 16 per cent increase, but the Government offered 86 per cent of teachers a pay rise ranging from about 2.2 per cent to 2.6 per cent a year for three years.

Teachers in their first three years, the other 14 per cent, were offered pay rises averaging 4.3 per cent to 4.7 per cent a year for three years.

Country-wide voting finishes on Friday and the outcome should be known by Tuesday.

New Zealand Educational Institute’s lead negotiator Liam Rutherford said the union felt the offer fell short of what was needed to attract people into the profession. It hoped to see a change after the vote.

“There are definite solutions out there, but they cost, and if we value education and we value teachers, the Government’s going to have to front up with the money.”

Pay isn’t the only issue though, as teachers want more support for workloads and help for children who need more assitance.

The vote in each region was secret so not to influence the result of other ballots, but it seems most teachers feel the same way about accepting the offer.

“I haven’t come across a member that has said ‘we think the offer’s all right’. And to have such strong opposition from members around the offer from the ministry, I would imagine it’s going to come out resoundingly no,” Rutherford said.

At the meeting, the union asked asked people to sit down if they were thinking about leaving the profession, going into management or taking maternity leave in the next five years, and there were few left standing who would be in a classroom.

Rutherford, also a teacher at Palmerston North’s Ross Intermediate School, went to seven meetings across the country and the same issues came up.

“I think [teachers] feel quite buoyed by the fact they have a real vehicle through this campaign to do something and return teaching to its glory days.”

Palmerston North Intermediate Normal School teacher Kay Webber could only see the vote going one way because otherwise teachers will be in trouble. “It’s no longer a profession,” she said. “It’s been eroded so badly.”

Webber has been teaching for 37 years, 34 of those at Intermediate Normal, and she said workloads had increased every year.

“Everything that happens they put it back on the teachers and we’re getting more and more difficult children. The class sizes aren’t being reduced and there are more special-needs children that deserve a fair go and deserve to have the resourcing put in to help them learn.