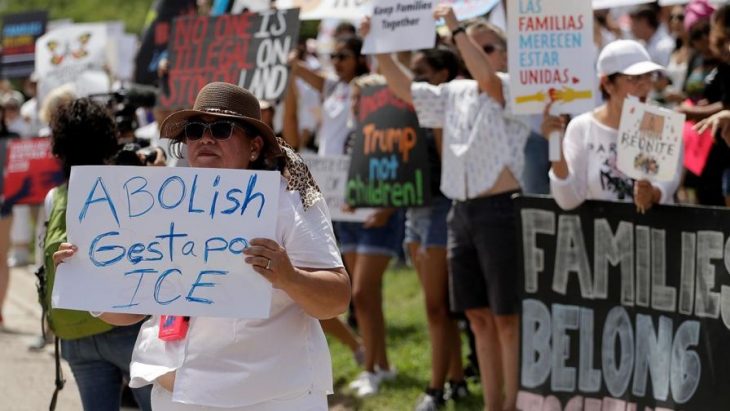 What to know about ‘Abolish ICE,’ and how the movement went from the far-left and became mainstream.

What to know about ‘Abolish ICE,’ and how the movement went from the far-left and became mainstream.

The controversy surrounding President Trump’s border policy has Americans split down the middle over the U.S. Immigration and Customs Enforcement agency, or ICE.

The latest Fox News Poll finds 41 percent of registered voters approve of how ICE is handling its job, while an identical 41 percent disapprove.  That said, by a more than 2-to-1 margin, voters are against disbanding the agency (42 percent oppose vs. 18 percent favor).

A large 39 percent minority says it doesn’t know enough about ICE to have an opinion on shuttering their doors.

Opinions on the job ICE is doing divide along party lines:  most Republicans approve (75 percent), while most Democrats disapprove (69 percent).

But Democratic disapproval doesn’t lead to a big push to dismantle the agency. Equal numbers of Democrats favor (25 percent) and oppose (27 percent) abolishing ICE, while the largest number is unsure (49 percent).

Attorney General Jeff Sessions detailed a “zero-tolerance” policy toward illegal immigration in a May 7 speech. “If you cross this border unlawfully, then we will prosecute you…If you are smuggling a child, then we will prosecute you and that child will be separated from you as required by law.”  President Trump later signed an executive order on June 20 ending family separations amid public outcry.

Should all individuals who enter the U.S. illegally be prosecuted?  Voters split again: 45 percent favor, while 46 percent oppose.

Approval of Trump’s handling of immigration has held steady at 43 percent since April, despite the heated debate surrounding the issue.

“When it comes to people who enter the country illegally, Americans tend to be practical — they want some sort of pathway by which people can earn their right to stay. On border security, Americans want order and rule of law.  So I’m not surprised recent events haven’t hurt Trump and the Republicans nearly as much as many of their critics hoped.  In fact, if Republicans frame the immigration debate as a border security question it could be a winning issue for them.”

The Fox News poll is based on landline and cellphone interviews with 1,007 randomly chosen registered voters nationwide and was conducted under the joint direction of Anderson Robbins Research (D) and Shaw & Company Research (R) from July 9-11, 2018.  The poll has a margin of sampling error of plus or minus three percentage points for all registered voters.