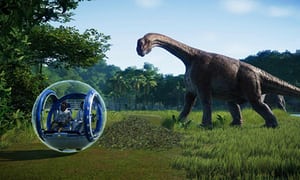 Can Jurassic World Evolution break the curse of the terrible licensed movie-game?

The perennial failure of video-game movies to capture the magic of their source material has been a hot topic this year – though as well as the boring new cinematic outing for Tomb Raider, 2018 has given us two qualified successes in the form of Ready Player One and Rampage, which suggests some improvement might be on the cards.

Historically, video games based on movies have also been disappointingly rubbish. When developers known for their work-for-hire efficiency rather than their specialised talents are given mere months to piece together a game to tie in with a theatrical release, it’s perhaps unreasonable to expect much.

British studio Frontier Developments is best known for space-exploration epic Elite Dangerous, a modern update to one of the best-remembered games of the 1980s – but this year, it will be releasing a game based upon June’s blockbuster Jurassic World: Fallen Kingdom. Unlike many movie-games, this isn’t an inferior digital recreation of the film. It’s a theme-park management simulation – with, of course, dinosaurs.

Frontier has been making theme-park sims since 2003’s fondly remembered Rollercoaster Tycoon, in which players were tasked with building up a park from scratch, planning attractions, building facilities, placing pathways, and making as much money as possible without everything going wrong (or all your customers wetting themselves because you forgot to leave enough money for toilets). Planet Coaster, which Frontier released in 2016, is the zenith of the theme-park genre to date: it’s smart, fun, challenging and funny, and gave Universal Studios confidence that Frontier could do something cool with its monster of a licence.

“We felt we could do justice to Jurassic Park,” says Andy Fletcher, lead designer on Jurassic World Evolution. “We’ve got plenty of experience with theme-park sims, and we’ve got experience in our animation team doing fantastic creature animations, having done [virtual pet game] Kinectimals and Zoo Tycoon in the past. I think we can say all of our games have led up to this one.”

Jurassic World Evolution has you thinking about all the usual theme-park planning: a good mix of rides, slightly overpriced food, a layout that lets people wander without getting lost. The dinosaurs, however, are the element of chaos. Even when things are running smoothly – and profitably – the presence of resurrected prehistoric predators means that something could always go awry. “In the movies, things go wrong, but the heroes prove themselves heroes in that element,” Fletcher says. “So that’s what you do in the game! Things will go wrong eventually. It’s about how you bounce back and save the day, and try to stop things going wrong in the future.”

After discovering genetic sequences necessary to clone your beasts, you can dive into your dino-lab to breed your park’s star attractions. Just like in the movie series, degraded DNA needs a bit of help to complete the chain, so you might splice in a bit of crocodile, octopus or amphibian DNA to fill the gaps and make the dinos more resistant to disease, or less ravenously hungry. Each time a bespoke terrible lizard finishes incubation and is released from the lab, the camera pans lovingly around your latest insult to Mother Nature. This is, of course, only the beginning – your park must be set up to feed them, make sure they have adequate habitats, give them others of their species to form social groups with, and generally make them happy.

Taking your eye off the prehistoric ball even for a short time will result in some very Jurassic Park outcomes. Bored, angry, or otherwise antagonised animals can and will break out of their paddocks – especially if you forget the electric fences – and run amok in the park, spreading panic and potentially death on their rampage. You don’t make money by killing guests and giving the dinosaurs the run of the place – just ask John Hammond – so when something goes awry, you can take control of a ranger team to subdue the confused, scared or outright murderous beast and have her airlifted back to a hopefully now better-secured paddock.

As you try to keep the park under control, Dr Ian Malcolm is in your ear reminding you that all of this is against the natural order. Jeff Goldblum reprises his role as everyone’s favourite shirtless chaos theory-toting mathematician, offering a voice of conscience to the player as you craft your park/play god/tempt fate. Goldblum is joined by Bryce Dallas Howard, Claire Dearing from the Jurassic World movies, and BD Wong, who returns as geneticist Dr Henry Wu.

This authenticity puts Jurassic World Evolution ahead of most movie-games, which are often made with little or no involvement from film studios. “Universal has entrusted us to make the game that we think is best,” says Fletcher, “Our expertise is in park management games and game development; we’ve gone to them for their expertise in the fictional world of Jurassic World. They’ve been fantastic in providing feedback and guidance.”

Just as video-game movies never succeed by slavishly adhering to the plots, lore and obscure rules of video games themselves, games based on movies always fail when they try to directly recreate a cinematic experience. Jurassic Park Evolution plays to the strengths of interactivity: most of the time, films have games beaten when it comes to telling great stories, but only games let you tell your own.