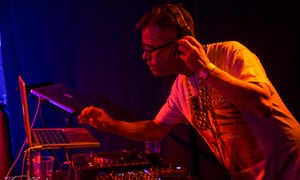 The myth that deafness impedes appreciation of music is gradually being debunked – and new technology is helping. But marginalised deaf fans say attitudes are still a huge problem

Growing up among the reggae soundsystems and pirate radio stations of 1980s Hackney, Troi Lee was surrounded by music, “speakers on the street corners blaring”. After getting a Walkman for his 14th birthday, he would wander through his neighbourhood playing songs by Public Enemy on repeat: “It was pure joy,” he says. This passion led Lee to follow in the footsteps of his cousin John and become a DJ. It’s a common enough path – except that Lee was born severely deaf.

With his hearing aids on the telecoil setting, he could hear certain frequencies of his Walkman – the bass vibrations from the percussion and glimpses of lyrics – through a magnetic wireless signal. When DJing, Lee, now 44, uses digital software to visualise the instrumental elements that he mixes together. “We need to reverse the myth that deaf people can’t enjoy music,” Lee says. “I don’t let my deafness affect me. I want to show the world that deaf people can play music just as well as our hearing peers.”

The idea that deafness impedes the appreciation of music is gradually being debunked. In 2013, sign language interpreter Amber Galloway Gallego went viral in the US for her animated performance for rapper Kendrick Lamar at the Lollapalooza festival. Rather than merely signing the words, she embodies musical textures with her face and movements, showcasing a unique technique that she describes as “showing the density of sounds visually”. To represent bass, she places her arms in front of the lower part of her body and inflates her face, replicating the sign for “fat”, while higher frequencies are placed at head height and above. After her performance, US talk show host Jimmy Kimmel took notice, inviting her and fellow interpreters Holly Maniatty and JoAnn Benfield on his show for a “sign language rap battle” in 2014.

Despite some progress, a report by accessibility charity Attitude Is Everything recently stated that in the UK over 80% of deaf and disabled music fans have experienced problems when booking tickets to live music events. The UK’s live music census in February also found that only 30% of surveyed venues have dedicated disabled-access areas and only 7% of surveyed promoters have a policy to provide PA (personal assistant for deaf and disabled customers) tickets as standard. Yet it’s estimated that more than 3.3m deaf and disabled fans attend live music events every year, with a 70% rise in disabled-access ticket sales reported in 2016.

With one in six people suffering from hearing loss in the UK and around one in 1,000 children born profoundly deaf, the lack of accessibility to live music for deaf people is a significant challenge, and deaf fans believe too little is being done to serve their needs. “I don’t go to live shows very often as they’re not that accessible,” says writer Rebecca Withey, who is profoundly deaf. “There is absolutely not enough provision for us, and ironically when some venues do host accessible shows, they don’t promote them well enough for us to find out about them.”

For some fans, difficulties around access can put an end to nights out altogether. “Being ignored by the music industry has made me disengage from live music,” says deaf journalist and film-maker Charlie Swinbourne. Fans say specialist provisions are crucial: interpreting should be as readily available in the UK as it appears to be in the US, says student Liam O’Dell, while Lee believes that “all promoters should allocate a certain number of tickets for deaf and disabled people”.

Small steps are being made towards inclusivity: festivals such as Glastonbury and Festival Republic events Reading, Leeds and Latitude all provide BSL interpreting on request. Still, the provision can face obstacles. “When access is permitted it is often done so reluctantly – it is not widely advertised, left unregulated and is often of an inadequate standard,” says Marie Pascall, director of Performance Interpreting, which provides the service for Festival Republic. She describes one instance where “an act refused to have the interpreter on stage, and then refused for the interpreter to sign any of their performance”.

Troi Lee has taken matters into his own hands. In 2003 he founded Deaf Rave, a quarterly event in London designed specifically for deaf clubbers. The inspiration came from his experiences at illegal warehouse parties in the early 1990s, where the speakers amplified the vibrations he had once enjoyed through his Walkman. “It’s something I can’t quite describe,” he says, “the lasers blazing up the place and the biggest soundsystems I have ever seen or felt, shaking the entire warehouse.” From that moment in 1991, he set out to convince the deaf community that clubbing was as much a part of their culture as the hearing world’s. Through heightened bass levels and the use of new technology such as SubPac – a wearable speaker that intensifies vibrations – Lee can make his events immersive.

The organisation celebrates its 15th anniversary this year, but Lee says there is still much to be done. Deaf people are twice as likely to suffer from depression as hearing people. Withey says: “There’s still a huge stigma attached to being a deaf music fan.” Says Lee: “We are one of the most marginalised groups in society, owing to our isolation, unemployment, lack of BSL in mainstream schools and the daily frustrations of communication barriers. We organised Deaf Rave because we have empathy for our community.”