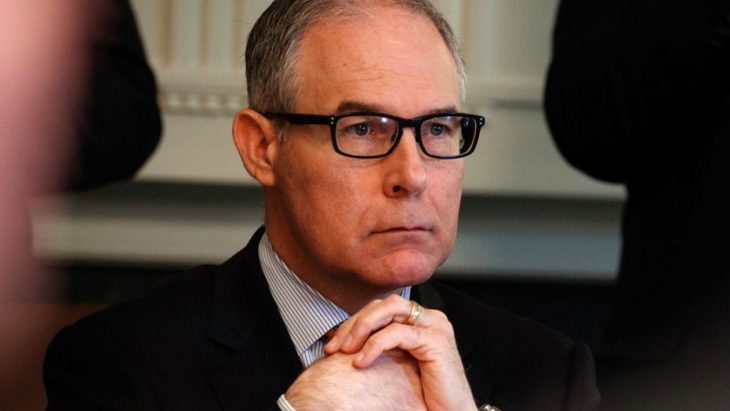 Scott Pruitt, the head of the Environmental Protection Agency, on Monday was confronted inside a restaurant in Washington, D.C., by a teacher holding her two-year-old son.

The New York Post identified the woman as Kristin Mink, 33, and reported that the encounter was filmed by her husband at Teaism restaurant.

“I had to decide what to say, he’s so scandal-ridden,” Mink told the paper. “I jotted down just a couple points that I wanted to make to him that were a little on the specific side.”

The latest encounter comes as Democrats appear divided on confronting Trump administration officials in public after high-profile episodes that included White House Spokeswoman Sarah Sanders and Kirstjen Nielsen, the head of the Department of Homeland Security.

The video shows Mink approach Pruitt, who was seated with another man at a table. Mink, at times, consulted her notes and asked him to step down due to his stance on the environment and mounting scandals.

Pruitt faces a barrage of ethics complaints and federal inquiries.

The EPA’s inspector general, the Government Accountability Office and the White House are investigating numerous allegations concerning Pruitt’s spending on first-class travel and security, his dealings with subordinates and with lobbyists, and other matters.

A senior counsel for the EPA resigned last month just days after appearing before a panel of House oversight committee investigating allegations of mismanagement and spending at the EPA.

Pruitt has also been criticized in connection with the rental of a Capitol Hill condo tied to a prominent oil and gas lobbyist, and the use of first-class travel and luxury hotel suites, among other things.

Pruitt, in appearances before congressional hearings this spring, has denied responsibility for any ethical lapses, saying subordinates made those decisions.

Mink told The Post Pruitt did not say anything during the encounter and left right after she approached him.

Pruitt’s spokesman told the paper that the administrator did not leave because of the encounter, and thanked her.

“Administrator Pruitt always welcomes input from Americans, whether they agree or disagree with the decisions being made at EPA. This is evident by him listening to her comments and going on to thank her, which is not shown in the video,” the spokesman told The Post.