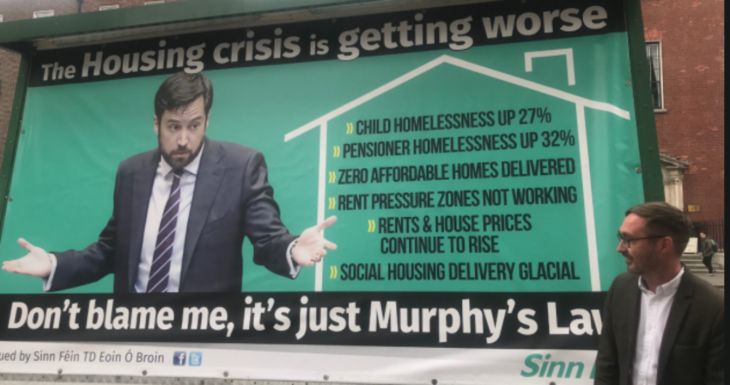 Minister Eoghan Murphy compared it to a ‘Trump approach’.

ON TUESDAY, SINN Féin unveiled a mobile billboard featuring the image of Housing Minister Eoghan Murphy. It blamed what it says is the worsening of the housing crisis on “Murphy’s Law”.

The party’s housing spokesperson Eoin Ó Broin TD was on hand to reveal the poster and said that he had “no confidence in Eoghan Murphy”.

O’Broin went on to list what he said were the government’s failings to deliver on promises such as increasing the stock of social housing and the introduction of a vacant property tax.

But his comments were not as eye-catching as the billboard behind him.

It was very much a visual attack on the minister’s year in government and was an escalation of what has been a concerted effort to make him the face of the crisis.

Last month, Ó Broin said that Murphy was “not competent” and was “not fit to hold the office” he is in.

That particular charge was made following controversy over the miscategorisation of homeless figures in a number of councils.

But while criticism of individual ministers by the opposition is both expected and perhaps a vital part of parliamentary debate, Sinn Féin’s singling out of a specific minister with a poster is somewhat of a departure.

Finance Minister Paschal Donohoe and Murphy himself were both critical of the move yesterday, the latter declaring it a “PR stunt” and comparing it to a “Trump approach”.

“I said recently that I had heard one of the most useless contributions to the housing debate from Fianna Fáil. This week I saw it from Sinn Féin,” Murphy said.

While Paschal and I were busy in Cabinet finalising Home Building Finance Ireland, which will see thousands of new homes being built in this country, Sinn Féin were organising PR stunts.

Murphy continued: “Sinn Féin are only making personal attacks, we’ve seen it with recent crises which we have been focused on finding solutions and trying to find caring and compassionate responses for people. They’re interested in the politics of personality, it’s kind of a Trump approach to doing business that I abhor.”

Criticising opponents for engaging in personality politics is an expected defence to such a billboard, but it is also fair to say that if ministers are to take credit for successes, they must also be the face of failures.

Murphy will argue that the government’s housing plan is not failing and yesterday he said there has been a 75% increase in the number of homes available for use since 2015.

In Dublin, the latest figures for April show 1,351 families with 2,810 dependents were in emergency accommodation.

But if there is a reason for the housing crisis being so squarely associated with him, perhaps the person most to blame is his predecessor.

Simon Coveney’s July 2016 pledge that hotels would not be used for emergency accommodation within 12 months was a promise that followed him for the entirety of that year.

Coveney made it one of his key commitments and it was repeated so often that it was perhaps seen as the single greatest yardstick of his performance as minister.

In the end, the target was not met and Coveney did not stay in the job for the end of that 12 month period.

Instead, Murphy had been appointed to the position when the deadline passed.

It’s therefore no surprise that the Sinn Féin have taken what was essentially an open goal presented to them by Coveney and applied it to Murphy.

It remains to be seen how successful the approach is, however.

The proof of the pudding will perhaps only be when there is a general election and the public is asked who it trusts to solve the housing crisis.

At that point, expect to see plenty more faces on billboards.