BRUSSELS – U.S. President Donald Trump accused Germany on Wednesday of being a “captive” of Russia due to its energy reliance in a startling outburst before a NATO summit where he pressed allies to more than double spending on their own defense.

Having lambasted NATO members for letting U.S. taxpayers pay to keep them safe from Russia by failing to spend a target two per cent of national income on defense, Trump told fellow leaders he would prefer a target of four per cent of GDP – similar to U.S. levels – according to U.S. and foreign officials.

That would represent a massive upheaval of budgetary priorities in Europe where Germany and many others have pledged only to reach two per cent by 2030. Asked to confirm Trump’s proposal, NATO Secretary-General Jens Stoltenberg did not give a direct answer but said the aim first was to reach two per cent.

A White House official said four per cent was not a formal proposal. U.S. defense spending in 2017 was 3.6 per cent of GDP. 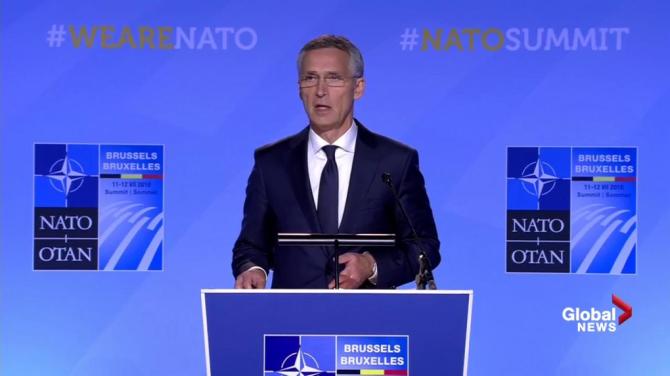 Leaders formally reiterated their “unwavering commitment” to raising spending and to better share the costs of joint defense.

Before the other leaders gathered, Trump told Stoltenberg that Germany was wrong to support an $11-billion Baltic Sea pipeline to import even more Russian gas while being slow to meet targets for NATO spending to protect against Russia.

“We’re supposed to be guarding against Russia and Germany goes out and pays billions and billions of dollars a year to Russia,” Trump said in the presence of reporters.

Trump appeared to substantially overstate German reliance on Russian energy and to imply Berlin was funding a pipeline which German Chancellor Angela Merkel says is a commercial venture.

She hit back at Trump’s remark that “Germany is totally controlled by Russia” through gas imports by contrasting her own experience of growing up in Soviet-controlled East Germany with the sovereign, united Germany now playing a major role in NATO.

Trump and Merkel later held businesslike talks on the sidelines. Trump said he had a “very, very good relationship” with Merkel, who described the two as “good partners.”

A source close to French President Emmanuel Macron said Trump had voiced his “personal attachment” to Europe and gave “rather positive and constructive messages” to his allies.

“There is no break-up between America and Europe,” the source said after Macron and Trump held “friendly” talks.

But with tensions in the Western alliance smoldering over Trump’s trade tariffs on European steel and his demands for more contributions to ease the burden on U.S. taxpayers, his earlier remarks fueled concerns among allies for the U.S. role in keeping the peace that has reigned since World War Two.

Baltic leaders fearful of any repeat of Russia’s annexation of Crimea called for unity as they arrived at the summit, while Slovak President Andre Kiska said his country was “one of the good guys” because he was increasing defense spending.

Those comments underscored the risks to Trump’s strategy by dividing allies between those who spend more on defense and those who do not, such as Belgium, Spain, Italy and Luxembourg, but who contribute with troops to NATO missions.

After joking that his breakfast with Trump at the U.S. ambassador’s residence had been paid for by the United States, the NATO chief was frank about the impact of Trump’s criticism on the Western allies at a broader level. 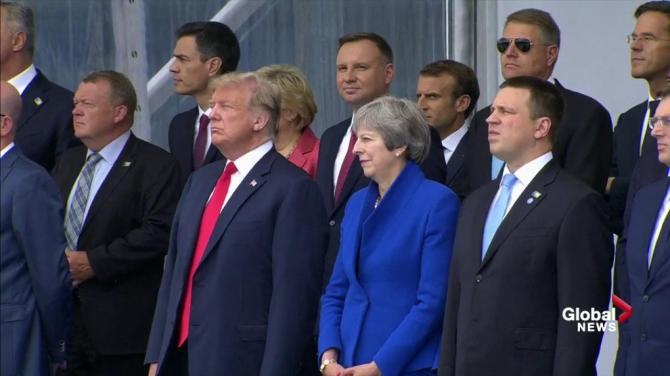 “There are disagreements on trade. This is serious. My task is to try to minimize the negative impact on NATO,” he said.

“So far it hasn’t impacted on NATO that much. I cannot guarantee that that will not be the case in the future. The transatlantic bond is not one, there are many ties, some of them have been weakened.”

Trump had said that Germany’s closure of coal and nuclear power plants on environmental grounds had increased its dependence, like much of the rest of Europe, on Russian gas and making it “a captive of Russia.”

He also said: “Germany is totally controlled by Russia because they are getting 60 to 70 per cent of their energy from Russia.” That seemed to misstate German energy use – about 20 per cent of which comes from by oil and gas imports from Russia.