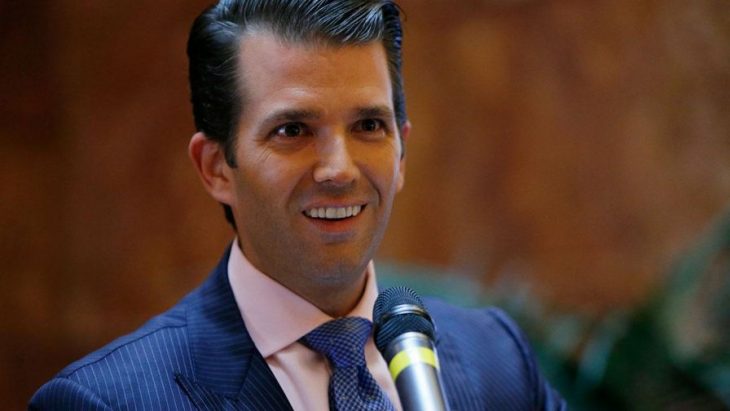 President Donald Trump’s eldest son, Donald Trump Jr, tweeted an email thread on how a meeting with a Russian lawyer with potentially incriminating information on Hillary Clinton came to fruition, leading up to the 2016 presidential election

President Donald Trump’s eldest son, Donald Trump Jr, tweeted an email thread on how a meeting with a Russian lawyer with potentially incriminating information on Hillary Clinton came to fruition, leading up to the 2016 presidential election

Donald Trump Jr. met with a Russian lawyer in July 2016 after learning she had damaging information about Hillary Clinton, the Democratic opponent of now-President Trump.

But Trump Jr. and other key figures involved in the meeting downplayed the gathering when questioned by Senate investigators.

“The meeting provided no meaningful information and turned out to be not about what was represented,” Trump Jr. told the Senate Judiciary Committee, according to recently released transcripts. He contended that the meeting with lawyer Natalia Veselnitskaya was actually regarding a Russian adoption prohibition.

Before Trump Jr. was set to meet with the Russian lawyer as his father campaigned for the presidency, Trump Jr. was told Veselnitskaya’s potentially damning information about Clinton was from the Kremlin, according to emails he released.

Trump Jr. has maintained that Veselnitskaya did not have any information to share and instead wanted to discuss other matters, such as the Magnitsky Act which enacts sanctions on certain Russian officials as punishment for human rights violations.

“After pleasantries were exchanged, the woman stated that she had information that individuals connected to Russia were funding the Democratic National Committee and supporting Ms. Clinton,” Trump Jr. said in a statement.

“Her statements were vague, ambiguous and made no sense. No details or supporting information was provided or even offered,” Trump Jr. continued

Rob Goldstone, a music publicist who set up the meeting, was also in attendance, as well as Rinat Akhmetshin, a prominent Russian-American lobbyist, Ike Kaveladze, a business associate of a Moscow-based developer and a translator.

A spokesperson for Trump’s outside legal team said Trump “was not aware of and did not attend the meeting.” Trump Jr. said he “wouldn’t have wasted his time” by telling him about the meeting.

Here’s my statement and the full email chain pic.twitter.com/x050r5n5LQ

Here is page 4 (which did not post due to space constraints). pic.twitter.com/z1Xi4nr2gq

In a June 3, 2016 email, Goldstone said he was asked to “contact you with something very interesting.”

“The Crown prosecutor of Russia met with his father Aras this morning and in their meeting offered to provide the Trump campaign with some official documents and information that would incriminate Hillary [Clinton] and her dealings with Russia and would be very useful to your father,” Goldstone said.

He added that the information was “very high level and sensitive” but was “part of Russia and its government’s support for Mr. Trump.”

Trump Jr. responded in less than 20 minutes saying that he wanted to check out the information first, but “if it’s what you say I love it especially later in summer.”

In another email, Goldstone referred to Veselnitskaya as “the Russian government attorney.”

As Trump Jr. does not have a position in his father’s administration, he is not required to disclose foreign contacts, according to The Associated Press.

Foreign nationals are prohibited from providing “anything of value” to campaigns, and that same law also bars solicitation of such assistance. The law typically applies to monetary campaign contributions, but courts could consider information such as opposition research to be something of value.

Trump Jr. told the Senate committee that if he had been given any information about Clinton, he would have consulted with counsel on what to do with it.

Bradley A. Smith, a former Bill Clinton-appointed Republican Federal Election Commission member, said based on what’s known about the meeting, Trump Jr.’s actions are unlikely to be considered illegal solicitation.

“It’s not illegal to meet with someone to find out what they have to offer,” Smith said.

But Larry Noble, a former general counsel at the FEC, said the situation “raises all sorts of red flags.”

“You do not want your campaign to be involved with foreign nationals, period,” said Noble.