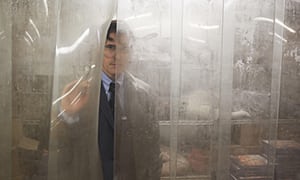 There was a mass walkout at the Cannes premiere of von Trier’s The House that Jack Built. From A Clockwork Orange to Driller Killer, cinema has always courted controversy – but could we be entering a more cautious age?

There is a stampede to get into The House That Jack Built and then, not long after, there is a stampede to get out. At the morning screening of the new Lars von Trier film at Cannes, I try to keep tabs on the number of mass walkouts. The first occurs when Matt Dillon’s bug-eyed psychopath sticks a kitchen knife in a breastbone; the second when a serene little boy cuts the leg off a duckling. I think the third might take place during the shooting at a picnic, although, by this point, I confess I am slightly losing track. On screen, Dillon’s character embarks on a lengthy discourse about wine – and, for some reason, this scene provokes a mass exodus of its own. Has the wine-making speech thrown these filmgoers a lifeline? It is barely 10 in the morning and they are running away to get loaded.

If one had to dramatise Von Trier’s recent history at the Cannes film festival, it could play as a series of entrances and exits, like a Feydeau farce without the laughs. The director walks into the press conference and jokes that he is a Nazi. The festival declares him persona non grata and has him bundled out. The director walks in with his comeback production. The public recoils, turns its back and walks off. One hundred invited guests reportedly absconded from Monday night’s world premiere, and a similar number exited the press screening on Tuesday. The House That Jack Built (a metaphysical serial-killer tale, constructed along similar lines to his previous film, Nymphomaniac) has been variously described as “vomitous”, “disgusting” and “irredeemably unpleasant”. Entertainment reporter Roger Friedman called it a “vile movie” that “should never have been made”. Except that, wouldn’t you know it, Friedman bailed out before the end, too.

Cannes normally loves a good scandal, but this year it feels different. The festival is nervous, chastened, still struggling to accommodate the #MeToo movement and adapt to a crumbling business model that has led pundits to question the festival’s relevance. Or maybe it is reflecting the culture as a whole.

Film used to thrive on controversy and danger. These days, it has had its shadowy corners exposed. Tastes are changing, a new morality bites and cinema’s underground beasts find they have fewer places to hide. Increasingly, it seems, the provocateur is being shown the door.

It is almost enough to make you nostalgic for the bad old days of “satanic” Kenneth Anger with his Scorpio Rising, Herschell Gordon Lewis (AKA “the Godfather of Gore”) and the incorrigible Russ Meyer, who peddled a personal interest in women’s breasts into a lucrative career totalling 23 feature film credits.

Cinema is a broad church that caters to all tastes. But it began its life as circus sideshow, on the magic-lantern and peepshow circuit of the late-19th century, and a disreputable pedigree has defined it ever since. So it is a thrill-seeker’s medium, a peddler of sensation, always best enjoyed under cover of darkness.

Or rather, it was until recently, before the advent of Netflix and smartphones and the white noise of social media. Once upon a time, underground cult films were consumed by the faithful, produced for the particular taste of a small diehard audience and often fiendishly difficult to find (which only added to their talismanic dimensions). Andy Warhol’s movies, such as Flesh and Trash (actually directed by Paul Morrisey) were projected as artworks in galleries. Abel Ferrara’s grisly Driller Killer and Ms 45 crowned him the king of the New York grindhouse scene. And John Waters’ early shockers (Mondo Trasho, Pink Flamingos) were shot for the amusement of a small cohort of pals down in Baltimore, many of whom doubled up as his cast. I remember plucking Tobe Hooper’s The Texas Chainsaw Massacre from the top shelf of a garage’s DVD rack where it sat alongside all the other video nasties. It was a simpler age.

“I have worked really hard on staying in my own little place,” Von Trier told me after his ill-starred Cannes premiere. “But then the world comes along and collides with it, like atomic particles or something.”

Therein lies the issue. These days the market is atomised, open to all, and everyone is drinking from the same water fountain – be it the dirty-mac crowd or chin-stroking students, innocent passersby or hapless little kids browsing on a laptop. (God forbid that they should Google “duckling legs” from now on.) We can stream a feature on our phone on the bus and then tweet our outrage to the masses while the infernal movie is still playing. Film is more public and exposed than it ever was in the past. Small wonder its content is being held to account.

Repulsed by movie violence? Then steer clear of the screens. Cinema has always done violence, from the early silent westerns right through to the present day. It is just that it is now rated more prohibitively than it was in the freewheeling 1970s, when a furore erupted over instances of reported copycat violence following screenings of Stanley Kubrick’s A Clockwork Orange. Yet the film was only yanked from circulation after the director stepped in to do it himself.

As for Von Trier, he is no stranger to violence (exhibit A: the infamous clitoris scene from Antichrist) and yet the male-on-female brutality in his latest work has had many people calling time on his whole career.

How about sex? That has been there from the start, the original sin; largely consensual but occasionally not. And what was first viewed as good sex is now seen rather differently. Take the case of Bernardo Bertolucci’s Last Tango in Paris – for so long defended as a jaundiced 70s classic, now widely reviled after the revelation that its star Maria Schneider (who always claimed that the film made her feel “a little raped”) was tricked into performing its most notorious scene. Or even a film as mainstream as The Breakfast Club, which its star Molly Ringwald rewatched recently, only to realise that a scene that had been framed as harmless flirtation was in fact a violation. And it is this level of scrutiny that helps to keep the films (and ourselves) honest. There are still too many bad apples passing themselves off as fresh.

Which brings us back to Von Trier, a man who appears to hop between apple barrels, by turns genius and monster, utterly captivating and frequently insufferable. He won the Palme d’Or in 2000 and typically competes for the big prizes. This time he is playing out on the sidelines, away from the press, like a misogynistic old uncle who can’t be brought out in public (an image, it must be said, that is not helped by his association with a producer – Peter Aalbaek Jensen – who recently confessed that he “liked slapping arses”. Not long ago, Von Trier gave the festival its spice, rolling into town to unveil dastardly fare such as Dancer in the Dark and Dogville. Now the man’s very presence amounts to a platforming issue.

Inside the Palais, down at the beachfront, I have heard The House That Jack Built described as an act of self-immolation, or even some vile act of vengeance on the festival that once loved him. There is no appetite for the film and the first reviews have been scathing. The consensus is clear. Von Trier is no longer welcome in the new, cleaned-up Cannes. He is too much of an idiot, too much of a risk, too obvious a throwback to the event’s bad old days. Is there also a consensus on the best way to kill film? I think it might be to shoot it by consensus.

As it happens, I found myself gripped by The House That Jack Built. It is enraging and irresponsible, brilliant and bold, an outrageous joke shouted out of the abyss. But all of that is beside the point. If I loathed the picture with a passion, I would still want it included. Von Trier needs cinema and cinema needs him right back.

What, after all, do we look for in a film? Is the best movie the one that soothes us, reassures us; that basically tells us what we already know, but manages to do so in novel and entertaining new ways? If so, fair enough. But for cinema to remain valid, it needs the counterweight, too: some hard shadow to make the light glow more brightly. It needs films that challenge and disturb, that appal and revolt; that have us bolting towards the exit in search of a stiff drink at 10am. In these troubled times, of course, there is a natural urge to play safe. But it is at such anxious moments that we need the provocateurs most of all.

Cometh the hour, cometh the idiot. This is the very worst year for Von Trier to be in Cannes. Which is another way of saying that it is the absolute best.